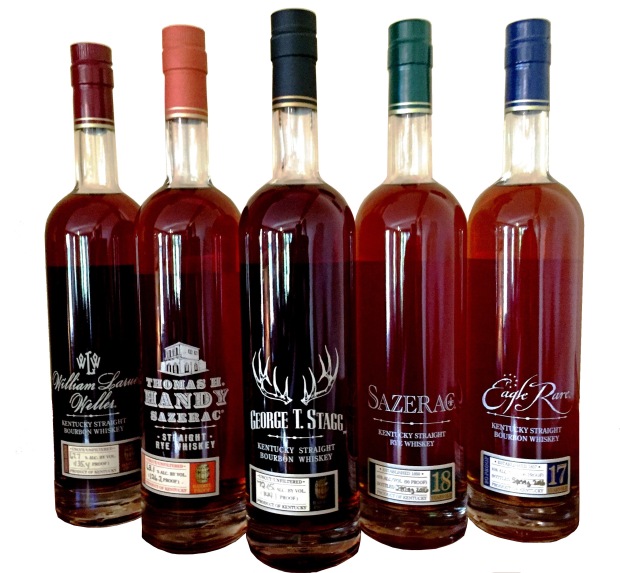 Autumn used to mean a crispness in the air… leaves turning colors…  Now, it’s associated with the release limited edition whiskies.  One of the big dogs is the Buffalo Trace Antique Collection.  Five whiskies are released each year at various ages and proofs.  This year’s releases are priced at $90 (good luck finding at bottle anywhere near that price).  Let’s break down the collection:

Barrels for this were laid down in the spring of 1998, when I was graduating high school.  Yikes!  This is the first release in years that doesn’t come from a vatted tank.  Damn close to previous bottlings. Compared to the vatted releases, the new 2016 feels slightly fresher in the nose. It doesn’t have as sharp the rye spice. It’s still as rich as ever: Freshly grated ginger, coffee cake, cinnamon sugar, clove and allspice. On the palate, the aged rye grain provides a bit of zest and slight sharpness to an otherwise rich whiskey. Notes of Christmas cake, cinnamon, dark brown sugar dominate alongside the sharp rye. On the backend, the long maturation starts to show its hand with some tannins and a bit of oak spice. The finish is not as long as I’d like, but nice. Some semi-sweet/spicy nutmeg and candied ginger lead to a dry finish. I agree with Whisky Advocate’s John Hansell in that this new bottling isn’t as dry as previous releases, and comes across as a tad sweeter. To me, the oak really starts to show itself on the back palate. This is one whiskey that’s hard not to like. When it comes to well-aged rye whiskies, Sazerac 18 is still king. 9/10

Aged 17 years, Eagle Rare 17 is the oldest bourbon in the Buffalo Trace Antique Collection. I tend to describe Eagle Rare 17 as an elegant sipper, and this year’s release lives up to that description. Old leather jacket, tobacco, and slightly burnt caramel lead the nose, with a touch of oak and spice just underneath. On the palate, dried fruits and dark caramel provide some sweetness, which is tempered by baking spices and slightly drying oak tannins. There’s a little vanilla to be had with some airtime. The finish is long, spicy and dry. This year’s bottling doesn’t come across as oak-heavy as last year’s, but make no mistake: oak is still a major player here.  8.5/10

The 2015 edition of George T. Stagg was my favorite whiskey last year. How does this one compare? For starters, it comes in at a whopping 72.05% abv, or 144.1 proof. The semisweet nose carries concentrated aromas of dark cherries, espresso, vanilla bean and cola. Taste-wise, we’re talking chocolate covered cherries, cigar box, dark brown sugar and a sort of sweet oak. Those oak tannins take hold, and the whiskey becomes a bit dry leading into the long, semi-sweet/dry finish. Oak is a more dominant note here compared to last year’s release, but the whiskey not as disappointing as other reviewers have made it out to be. An oak-heavy George Stagg still carries itself with more high esteem than say, Orphan Barrel’s Forged Oak or Rhetoric.  8/10

William Larue Weller is always a hot seller amongst bourbon collectors. It comes in at 12 years and 7 months old, which many consider a “sweet spot” in terms of aging. This year’s release is 135.4 proof. Weller is always a solid release. The fact that it shares the same wheated recipe as the Van Winkle bourbons makes this one almost as impossible to find. The nose is rich and robust, with sweet caramel, dark fruits, toasted oak and vanilla. On the palate, juicy dark fruits mingle with brown sugar, vanilla, and some allspice. A touch of oak shows up on the backend, adding a hint of cinnamon. The finish is sweet and long, urging you to take another sip. This one’s a keeper!  8.5/10

Thomas H. Handy is the odd man out in the Buffalo Trace Antique Collection. Whereas the other whiskies are 12, 15, 17 and 18 years old, Handy comes in at a mere six years of age. It’s basically the barrel proof version of Buffalo Trace’s Sazerac Rye whiskey. I have a bottle of the 2013 release open at the house, and I enjoy it from time to time. This year’s release comes across as young. Those sharp rye and dill aromas are in charge here. Some light caramel and cloves round out the nose. It smells young-ish. It tastes like it smells, unfortunately. An initial sweet caramel candy note kicks off the palate, followed by dill, toasted rye bread, and cinnamon. The finish is a touch fiery, and leaves a pleasing sweet and spicy flavor. I hate to say this, but I’m not a fan of this year’s Handy. It just feels young and disjointed. Ten times out of ten I’ll reach for Heaven Hill’s Pikesville Rye at almost half the retail price of this. My 2013 bottling of Thomas H. Handy blows this one out of the water.  6.5/10

My favorite of the bunch is still Sazerac 18.  Buffalo Trace did a fantastic job with this release, along with Weller and Eagle Rare.  George Stagg isn’t as good as last year’s phenomenal release, but it doesn’t mean it’s bad.  This year’s slightly oak-heavy release still comes with a recommendation.

Spirits-based websites and blogs generally post a Top 10 list or Holiday Gift Guide at the end of the year.   I did the same in 2014, but this year I’m changing things up a bit.  Reflecting back on the past year, I came up with a listing of whiskies that I not only thoroughly enjoyed, but ones that I found were memorable.  These cover both American and Scotch whiskies, regular offerings and limited editions.

Except for the top spot, these are listed in no particular order.

The year is not over yet.  I’ve got some potentially incredible whiskies waiting to be tasted.  Who knows if they’ll make this humble blogger’s list of favorite whiskies of 2016.  Until then, Sláinte!