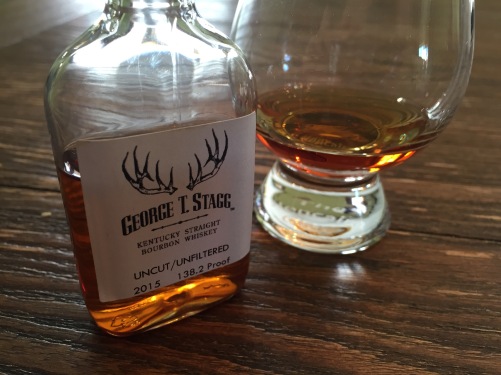 George Stagg is always a favorite among fans of the Buffalo Trace Antique Collection.  Aged 15 years and bottled straight from the barrel, Stagg stands as the king of barrel-proof bourbon.  It’s almost always the highest proof whiskey in the collection, and this year is no different.  A 138.2 proof bourbon is not for the weak or the weary.  Keeping some water nearby is some advice to take to heart with a pour of this year’s George Stagg.

The 2015 release of George T. Stagg will be a small one.  Of the 128 barrels selected for this year’s batch, some 84% of it evaporated.  Some barrels only had a gallon or two of whiskey left.  If you thought Stagg was hard to get before, this year will be nearly impossible.  Just over 5,000 bottles are estimated to be released.  That’s close to half of last year’s numbers.

The nose here is intense, as expected.  There’s a concentration of dark caramel, herbs, vanilla, nougat and cinnamon.  Prep yourself for that first alcohol punch.  Looking past that, I get vanilla bean extract and dark chocolate, followed by caramelized fruit and molasses. There’s a little spice here, along with some oak and a slight bitter note.  This whiskey feels thick and almost chewy. The finish is long, warm, spicy and bittersweet.

I’ll just come out and say it – this year’s George Stagg release is one of the better whiskeys I’ve had all year.  This is every bit as good as last year’s batch.  It’s a damn shame there aren’t enough bottles to go around.   Happy hunting, folks.