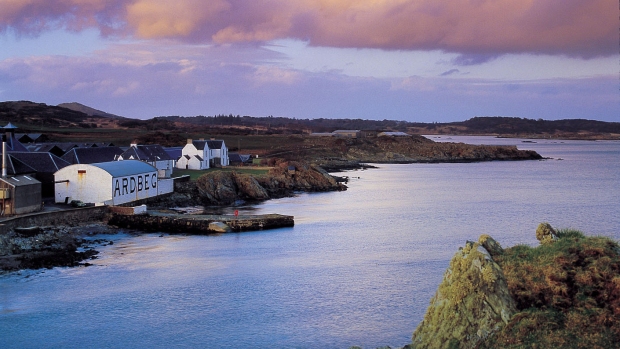 I’ve never had the pleasure of drinking Ardbeg.  That is, until this tasting.  You see, until fairly recently, I wasn’t interested in Scotch.  My whiskey drinking was limited to bourbon and rye whiskey.  The former is a generally sweeter style of whiskey, and like most Americans, I have a sweet tooth.  Then as the obsession with American whiskey grew, the once great selection of fantastic bourbon and rye on store shelves shriveled and simultaneously retail prices increased.  I found myself spending less time browsing the bourbon aisle and more time looking at Scotch.  After a while I began researching Scotch whisky and realized the abundance of outstanding bottles simply collecting dust on shelves.  I then made the decision to broaden my palate.  I began my Scotch journey with a few blended whiskies (Johnnie Walker, Chivas Regal, Famous Grouse) and standard “beginner” single malts (Glenlivet, Glenfiddich, etc.) and worked my way to much more complex offerings.  Eventually it came time to explore Islay whiskies.  Instead of starting with something unpeated or mildly peated like Bruichladdich or Bunnahabhain, I went straight for one of the biggest whiskies produced on the Islay – Laphroaig.  From the moment I opened the bottle and that lovely peaty aroma filled the room, I was hooked.  Many months (and whiskies) later, I decided to properly revisit Islay whiskies with this current series.  Which begs the question: if I love Laphroaig, how is it I’ve never tasted Ardbeg?  Let’s briefly talk about the distillery and get into the tasting.

Like the Laphroaig Distillery, the Ardbeg Distillery celebrated its 200th anniversary in 2015.    The two are similar in that both distilleries produce some of the peatiest whiskies on Islay.  Ardbeg almost has a cult following.  Fans of the brand REALLY love Ardbeg.  Ardbeg does not chill-filter their whisky, and most releases are bottled higher than the standard 40% abv.  While not outright stated and based on the color of their whiskies, Ardbeg doesn’t seem to add caramel coloring.

The distillery has been owned by Glenmorangie since 1997.  Two men are mainly responsible for what’s being bottled – Mickey Heads and Dr. Bill Lumsden.  Heads is an Islay native who is the current distillery manager.  He’s responsible for the everyday distillation.  When it comes to crafting new blends of Ardbeg, Dr. Lumsden, who also oversees Glenmorangie, is the key figure.  Both men pour their hearts into their work, and it’s evident in the whisky.

Just like Laphroaig, Ardbeg’s base expression is a 10-year-old single malt.  This whisky is matured in ex-bourbon casks and bottled at 48% abv, giving the whisky some punch and allowing the flavors and aromas a better chance to shine.

The nose is strongly peaty, giving us some earthy and briny notes.  A light caramel sweetness gives this whisky some balance.  I do get a sense a barbecue on a beach here.  Interestingly, a small citrus note creeps up in the background.  Taste-wise, a peat punch straight out of the gate.  Instead of an upper-cut, it’s more of a strong right hook.  Brine, light toffee, and vanilla are the key players here, all over a bed of smoke.  With some airtime, the sweet notes become a tad more prominent.  The finish is long, sweet and smoky, eventually developing that small briny note.

A criticism of the current bottlings of Ardbeg among experienced whisky enthusiasts is that the whisky just isn’t as good as it once was.  As I haven’t tasted older bottlings, I can’t really agree or disagree.  What I will say is the current Ardbeg 10-year-old is a full-bodied masterclass of peated Islay whisky.  If this is the base expression, I can’t wait to explore other offerings from the distillery.  A bottle of Ardbeg 10-year-old should cost around $55.

Another whisky in Ardbeg’s core lineup is Uigeadail (Oog-a-dal).  It’s named after Loch Uigeadail, which is the distillery’s peaty water source.  Uigeadail is a cask-strength (54.2% abv) expression that blends whiskies matured in ex-bourbon casks and ex-sherry casks.  There’s no age statement found here, but that’s not an issue.

The sherry cask-matured whiskies provide a nice richness to the nose.   In addition to the “peat reek” found in Ardbeg, dried fruits and stewed fruits are abound, specifically raisin and prunes.  After the initial alcohol sting of the entry, Ardbeg Uigeadail becomes a smoky and fruity beast.  I don’t get the earthy peat notes like I do in the 10-year-old because they’ve taken a backseat to the fruit notes.  Raisin, dry red wine, toffee and vanilla play well with the smoked meat notes.  There’s a subtle brininess buried here as well.  The long finish is a blend of smoke and tropical fruit (almost like a fruit punch).

I seem to be a sucker for sherried peated whiskies.  Bowmore 15-year and Laphroaig 32-year come to mind.  This is an exquisite whisky.  Although it doesn’t represent Ardbeg’s style as well as the 10-year expression, Uigeadail might be my favorite of the two.  Highly recommended.  A bottle of Uigeadail retails for about $79.