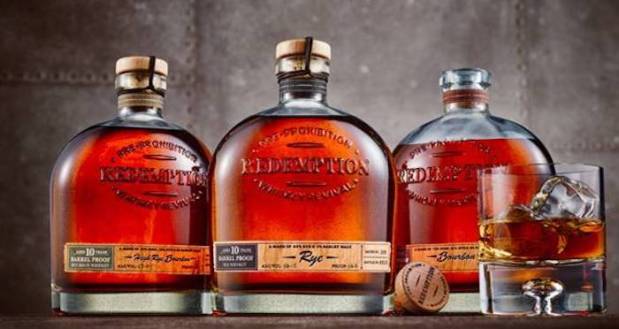 Back in the fall of 2017, Redemption Whiskey released a trio of barrel proof whiskies consisting of two bourbons and a rye.  These are the same MGP-distilled whiskies used in Redemption’s core line, but carry higher age statements of 9 and 10 years.  They have been ‘minimally filtered’ and are available for $99.99.  Let’s take a look…

Bottled at 108.2 proof, Redemption’s Barrel Proof Bourbon comes from a mash bill of 76% corn, 21% rye, and 4% malted barley.  The aromas are packed pretty tight, featuring hints of roasted corn, minerals, maple syrup and a sprinkling of leather.  On the palate, a nice array of flavors present themselves in a bold way, including hints of caramel corn, spice cake, as well as a touch of flint and sweet oak.  The warming finish sticks around for a while.  I don’t think water is needed for this one.  It doesn’t come across as “hot.” Rather, it’s a great example of a barrel proof whiskey whose flavors are well rounded and best enjoyed as is.  8.5/10

Slightly older is the 10-year-old High-Rye bourbon, with a mash bill of 60% corn, 36% rye, and 4% malted barley.  On the nose, the extra rye is evident as we find a boost in the spice department.  Hints of baking spices abound.    In addition, slightly darker caramel, vanilla bean and espresso notes are present.  Taste-wise, big flavors paint the picture: Mexican chocolate, nutmeg, caramel, and sweet oak.  The finish is long and chest-warming, with lingering hints of dark chocolate-covered toasted almonds and toffee.  Like the 9-year-old bourbon, this expression, bottled at 114.8 proof, doesn’t need any water.  It’s a well made whiskey, that’s for sure.  9/10

Last but not least, Redemption’s 10-year-old rye whiskey features a familiar MGP mash bill of 95% rye and 5% malted barley.  It’s bottled at 116.2 proof.  The nose leans a bit towards the herbal, with hints basil and fennel sitting alongside fresh ginger and caramel.  The palate closely follows the nose.  More basil and dill at first, punctuated by dark chocolate, vanilla cream and dark toffee.  Oak spice and cigar box develop soon afterwards.  The finish is long and a touch dry, as expected, with hints baking spices, red pepper flakes and toffee.  A wonderfully aged rye whiskey that balances spice, herbs, and sweetness.  8.5/10

Thanks to Redemption Whiskey for the samples.  As always, all thoughts and opinions are my own.