I don’t see a lot of reviews online for this monster of a bourbon, so here goes.  Booker’s is produced by Jim Beam.  It’s part of their Small Batch collection, which also includes Knob Creek, Basil Hayden, & Baker’s.  Booker’s is named after Booker Noe, Jim Beam’s grandson and former Master Distiller at Jim Beam.  Booker, like many of the older generations of master distillers, used to bottle “the good stuff” and give it out as gifts to friends and family.  In the late 1980s, he decided to release it for the general public.  Booker’s label says it’s bottled uncut and straight from the barrel.

To celebrate the 25th anniversary of the first release of Booker’s, Fred Noe (Booker’s son and current Master Distiller at Jim Beam) decided to release this bourbon in very limited numbers.  The bourbon inside this release is said to be among the last barrels of whiskey distilled by Booker Noe before he died. 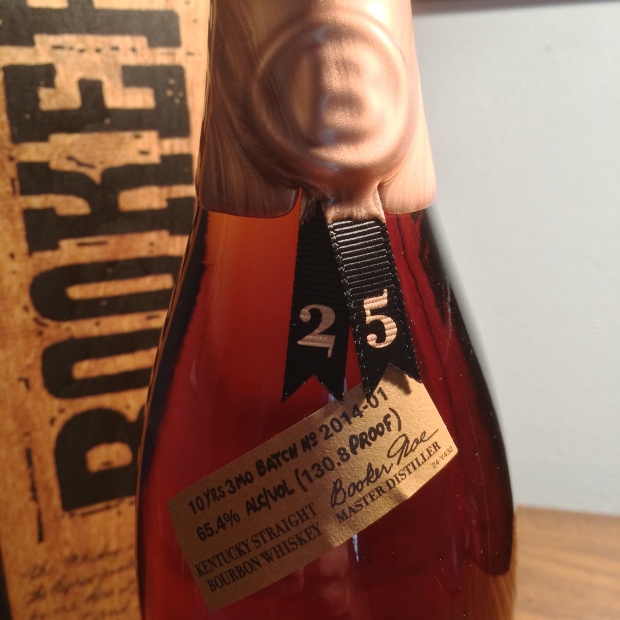 This release is 10 years 3 months old.  Normally Booker’s is 6 to 8 years old.  Does the extra time in the barrel make a difference?  Yes.  The normal release of Booker’s is an intense experience – a concentration of wood, spice, and sweetness.  This special release gives a similar experience.  Even at 130.8 proof I find the extra couple of years in the aging warehouse mellow this beast out a little.  That is, it’s a little smoother (if you want to use that word for whiskey) than the regular Booker’s.

This magnificent bourbon is intense when you drink it neat.  A little splash of water might be recommended.  I find it a little sweeter when I dilute it.  I get a lot of vanilla and caramel here, whether I drink it neat or diluted. 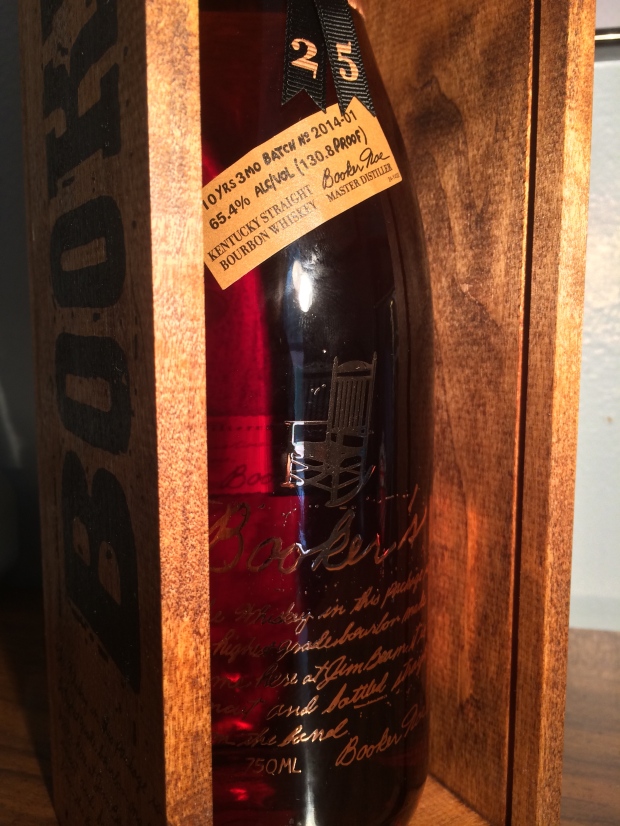 I’ve said before I’m a sucker for great packaging.  This one comes in a stained wooden box that’ll look impressive on your shelf.  The bottle is dipped in a copper colored wax and has gold embossed writing.  Booker’s 25th anniversary is my favorite packaging in a bourbon.

So cost…  $99 a bottle.   Because this is a special limited release, it’s going to be pricey.   There are only 1,000 cases of this available, which means only 6,000 bottles total, period.  It’s supposed to hit shelves later this month.  I bet it will be pretty tough to find.  Is it worth $99?  Short answer:  yes, if you like barrel-strength bourbon.  Booker’s regular release is about $50.  This one’s older and a bit more rounded in flavor.  If you like Booker’s, you’ll love this release.  If you’re new to barrel strength whiskey, sample Booker’s regular release first.

This is easily the best bourbon I’ve tasted from folks at Jim Beam.