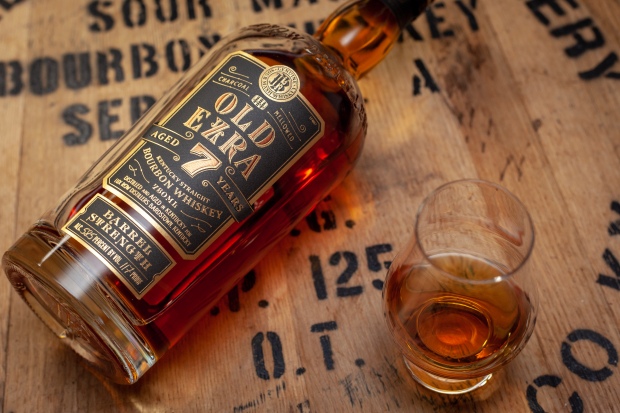 When this bottle of Old Ezra came across my sample table, the idea of a 7-year-old barrel strength bourbon excited me. The fact that it’s available for less than $40 is icing on the cake.

From a value standpoint, Old Ezra Barrel Strength checks off all the boxes on paper. But most important of all – is it any good?

It is, friends. In spades.

The nose is bold and full of rich caramel, spice, and some nuttiness. Taste-wise, Old Ezra Barrel Strength is full-bodied and robust, featuring hints of salted caramel, toasted oak, and black pepper. The finish is warm, with lingering cinnamon and toffee notes.

Luxco has another hit on their hands with this one. I hope Old Ezra Barrel Strength is a whiskey we can easily find on shelves. Luxco hasn’t made any mention of this being a limited release in press materials.

I can’t say it enough – this bourbon is fantastic! It’s on my shortlist as one of my favorite bourbons released in 2018. I know the flavor profiles are different and all, but this gives Booker’s a run for its money. If you’re a regular reader of this blog, you know how huge a Booker’s fan I am.

Thanks to Luxco for the sample. As always, all thoughts and opinions are my own.

The second release of Rebel Yell Single Barrel is already on shelves.  It launched in 2016 and quickly became one of my favorite bourbons released that year.  A 10-year-old, 100 proof wheated bourbon for about $60- seriously, what’s not to like?

As I just mentioned, Rebel Yell Single Barrel is a wheated bourbon.  That means the producers use wheat as the secondary grain instead of the more traditional rye.  Speaking of producers… though Luxco is currently building a distillery in Bardstown, they are still sourcing their whiskey from other producers.  In the case of most of Luxco’s whiskies, that source would most likely be Heaven Hill.

My review sample is from barrel 504315, which was filled in May 2006.  I said it before and I’ll say it again: kudos to parent company Luxco for adding this information to the label.

I’m happy to report the quality of last year’s release remains.  Big aromas of grilled sweet corn, caramelized sugar and vanilla fill the glass.  Slight hints of cinnamon and fresh brioche follow.  On the palate, classic bourbon notes are showcased – vanilla cream, cornbread, and cinnamon. A touch of leather and oak tannins lightly coat the tongue in the back palate.  The finish is long and somewhat sweet, with notes of spiced corn and caramel.

I enjoy bourbons of many walks of life.  Lately I’ve come to consider 8 to 12 years to be my sweet spot in terms of a bourbon’s age.  Heaven Hill’s 10-year-old Parker’s Heritage Collection from a couple of years back is pretty much a flawless bourbon for my tastes.  Barrel Bourbon Batch 005 was aged for eight years and still lingers in my memory.  Rebel Yell Single Barrel, though a different mash bill, hits on all cylinders.  It is extremely well-balanced and delivers a wonderful display of flavors.  8.5/10

Thanks to Luxco for the sample.  As always, all thoughts and opinions are my own.

Luxco’s Director of Brand Research and Development and I talk bourbon, Luxco’s new distillery and more as we taste the new Blood Oath Pact No. 3 and Rebel Yell 10 year bourbon.