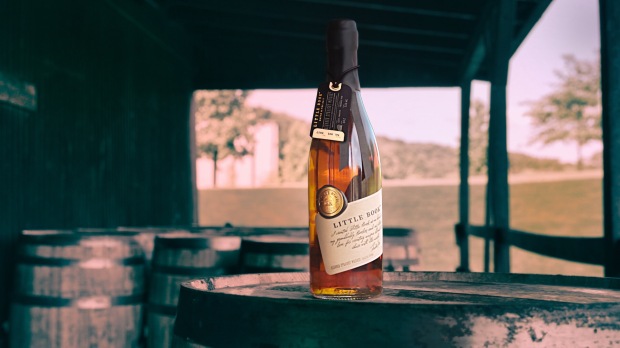 For the most part, I’ve quite enjoyed the whiskies that came from the hands of the late Booker Noe and his son Fred Noe – the current Jim Beam Master Distiller.  So it is with great anticipation that I get to preview THE debut whiskey from the eighth generation Beam, Freddie Noe.

Little Book, both the name of the whiskey and Freddie’s nickname, is scheduled to hit shelves this October.  This first batch, “The Easy,” is a blend of 13-year-old corn whiskey, 5-year-old rye whiskey, 5-year-old malt whiskey, and 4-year-old bourbon.  The ages of the component whiskies come courtesy of an informative article from writer Chuck Cowdery.  I’m being told by the company that the component malt and rye whiskies, once batched and bottled in the fall, will be “about 6 years-old each.”

Think of it as deconstructed bourbon.  The major grains of the component whiskies (corn, rye, and malted barley) are ones found in the traditional bourbon mash bill.  Cowdery also states in the aforementioned article that though Little Book is a blended whiskey, it contains no grain neutral spirit or flavoring.

Noe’s plan is to release a different blend each year.  He gets to experiment and has no shortage of barrels to play with.  In the tradition of his late grandfather’s namesake Booker’s, Little Book is uncut and bottled at barrel strength.  This sample I have is 120.48 proof.  As the whiskies are still in barrels and not yet batched together, the proof may slightly change.

Recently, Freddie Noe was kind enough to answer a few questions I threw his way.

BC: Freddie, let’s start with the name ‘Little Book.’ Tell us the story.

FN:  Little Book was my childhood nickname given to me by my family. It’s a nod to my granddaddy Booker Noe because people always thought we were just alike. I figured it was the perfect name to give my first release and pay tribute to my family.

BC:  How has your grandfather and father influenced your first whiskey release?

FN:  My Dad and my granddaddy are two of my biggest inspirations. I’ve always admired them for their character, and of course, their leadership in the bourbon industry. When I started working down at the distillery, I realized that my granddaddy and I had even more in common than I originally thought. Granddaddy was known for his spirit of experimentation, and when I started tinkering with whiskey myself, it awakened a real passion. For me, I love blending and the limitless taste profiles that can be created, and I knew that would be the foundation for my first release.

When I set down the road to bring Little Book to life, I tried to take into account all the lessons I’ve learned from my family over the years and during my time working with my dad at the distillery. Dad was one of the few who tasted Little Book before it was finished, and it’s being bottled uncut and unfiltered which I know is how granddaddy liked it too. Releasing Little Book is a big honor and responsibility, and I hope I’ve made the family proud.

BC:  This is the first high profile blended whiskey released by a major producer in a long time. Why blends of different types of whiskies instead of just a bourbon or rye release?

FN:  I’ve had just about every job at the distillery, but it was when I was working in our Global Innovation Center that I realized that I have a curious palate and a real fascination with blending. It’s like an open canvas. When you find just the right mix of liquids and blend them in the right amounts, you can create something that no one has tasted before.

When I was creating the liquid for Little Book “The Easy,” I wanted to pay tribute to what us Beams are known for – bourbon, and the core grains that make up a traditional bourbon mashbill. I blended corn, rye and malt whiskies together with Kentucky straight bourbon in varying proportions until I got the blend just right. The liquid streams in Little Book “The Easy” have been blended to create a taste profile that’s unique and one-of-a-kind.

BC:  Did you have an idea in mind of what you wanted when you set out to start this project, or did it evolve in the process?

FN:  I’ve been thinking about this product for a while now – it’s actually been years in the making, so when I got approval to create it, I was ready to get to work. It was a labor of love. I actually decided on the recipe for this blend on the second try, but it took me making more than 25 blends over the course of the last year until I decided the final liquid was just right.

Of course, Little Book will continue to evolve with a new blend being released each year. I’m excited to keep exploring all the possibilities with blending spirits and share some really unique liquids with whiskey fans in the coming years.

BC:  What do you think your grandfather would say after tasting this whiskey if he were still with us?

FN:  Well that’s the thing with my granddaddy – he’d tell you exactly what he thought, whether he liked it or not! But I like to think he’d be really proud and tell me “you done good!” To him, whiskey was meant to be drank however you liked it best, and in making Little Book uncut and unfiltered, you can do just that – you can drink it neat, with ice or even a little water. I like to think he’d add a couple drops of water to Little Book “The Easy” and enjoy it out on his porch swing.

As for the whiskey itself, the corn whiskey dominates.  Rich buttered kettle corn is the first aroma out of the glass, with a sprinkling of baking spices (most notably cinnamon stick) and a splash of maple syrup & butterscotch following closely.  The nose is a tad closed off, something remedied with a splash of water.  The whiskey is chewy (like great batches of Booker’s) with initial hints of butterscotch hard candy and sweet buttered cornbread, along with cinnamon, cloves, and some rye grain and nuttiness.  A bit of oak tannin appears on the backend into a long finish, with a hint of charred caramel corn.

It’s an interesting flavor profile, both reminiscent of classic bourbon and a complex corn whiskey.  I like what’s going on in the glass.  Little Book stands out as something a little different than a standard Beam bourbon.  Kudos to Freddie Noe for putting together a solid first release.  Fred, Freddie’s dad, should be proud.  8/10

Note: Updated on 8/11/17 to clarify the age of the component whiskies and proof of the final batch.