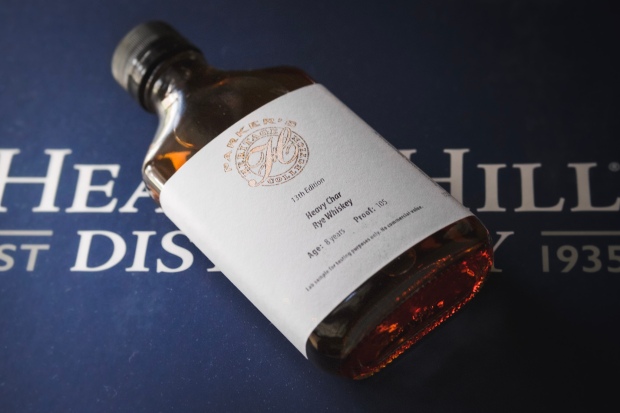 Starting this September, the 13th edition of Parker’s Heritage Collection will hit shelves. The 2019 limited edition release from Heaven Hill Distillery is a rye whiskey aged in heavily charred barrels. As with the past few Parker’s Heritage Collection releases, Heaven Hill will contribute a portion of the proceeds from each bottle to the ALS Association in honor of late Master Distiller Parker Beam.

Typically, the distillery utilizes a Level 3 char, but the barrels used in this release saw a Level 5 char. That equates to about 50 seconds more charring compared to a Level 3 char. The distillery states the intense charring allows the whiskey to penetrate deeper into each barrel stave.

The whiskey itself is made from the distillery’s standard rye mash bill and aged eight years and nine months] on the seventh floor of Rickhouse Y. Additionally, this release was bottled at 105 proof and non-chill filtered.

The aromatic nose features a heavy helping of baking spices, including the usual suspects – cinnamon sticks, candied ginger, and cardamom. Those spices are complemented by dark caramel, vanilla bean, and oak as well as toasted rye grain. Dark and spicy, but not overly so. Taste-wise, we’re looking at more of the same. Initial waves of slightly burnt caramel intermingle with oak spice and freshly baked rye bread. Creamy vanilla custard adds weight. Slightly astringent oak tannins grip the back palate and the bittersweet and spicy medium-long finish.

Compared to the distillery’s Pikesville Rye, which is only two years younger, this Heavy Char Rye Whiskey is darker, heavier, spicier, and more oak driven. It’s also about $100 more expensive, priced at $149.99. I really dug my initial casual pour. However, I didn’t find the whiskey as complex as expected when tasted under scrutiny. While I found the heavy char experiment interesting, the resulting whiskey didn’t quite captivate me. The nose was great, but the palate seemed to be missing a bit of vibrancy that would have made all the difference in the world.

As it stands, Parker’s Heritage Collection Heavy Char Rye Whiskey is an interesting, enjoyable whiskey, but is it worth $150? I’d rather grab a pour of the very balanced Pikesville Rye. 7.5/10

Thanks to Heaven Hill for the sample. As always, all thoughts and opinions are my own.