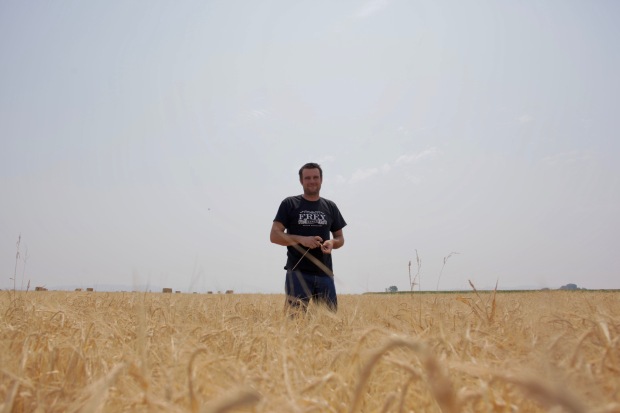 About an hour east of Reno, a most exciting craft distillery lies in the sleepy farming town of Fallon, NV:  Frey Ranch Distillery.  Run by husband and wife team Colby & Ashley Frey, the distillery is smack dab in the middle of their large farm estate.

The Freys have called Nevada home since before it became a state.  In fact, Colby’s great-great-grandfather filed one of the first land claims in the area.  Farming is the family trade.  It’s in their blood.  Multi-generational business history is one of the big pushes for some Kentucky distillers, and it is the same for the Freys when it comes to farming. 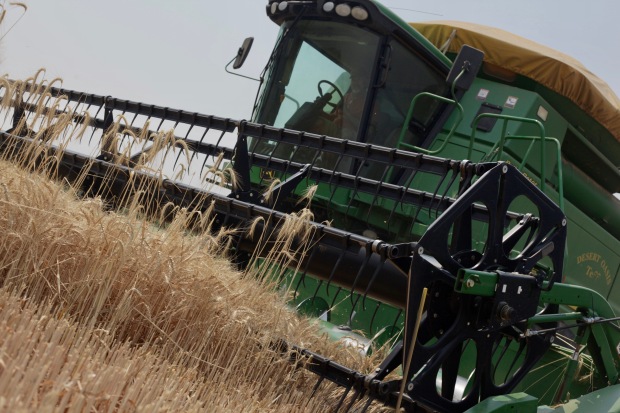 The Freys do everything on their estate, from growing grains to bottling.

“It helps, through generations and  through trial and error, to learn the best way to grow grain and other products in the desert of the driest state in the nation,” said Colby Frey.  “Now we have this unique ability to grow the grain in this atmosphere which is totally different than anywhere else in the world.”

Back in 2001, Colby and his father, Charles Frey, Jr., started growing vines and making wine.  He enrolled in several fermentation and wine-making classes, and took the time to practice and experiment.  “What’s neat about being a farmer is you have to know a little bit about a lot of things,” Colby said.  A jack of all trades, so to speak. 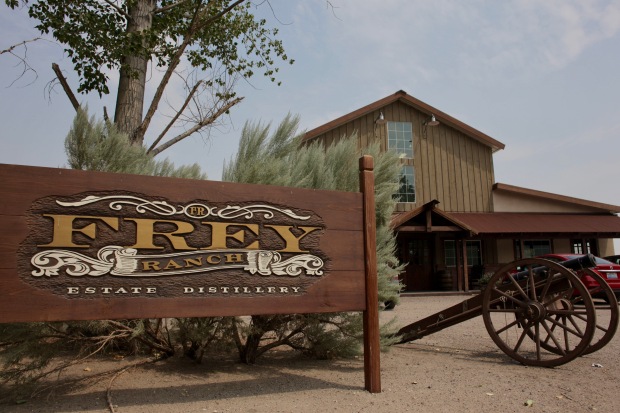 Frey Ranch Distillery is about a hour’s drive from Reno.

Distilling soon followed.  Grappa and brandy were the first spirits distilled at the estate, which makes sense given their wine-making proclivities.  The 50-gallon still used at the time was handmade by Colby, but that would change when they decided to expand their distilling capabilities.  Now, they are rocking custom-made Vendome stills.  Located in Louisville, Vendome Copper & Brassworks is the go-to still maker for a lot of American distillers.  With the new equipment in place, the Freys have the capacity to produce 10,000 cases of distilled spirit a month.

Years later, the first whiskey the Freys distilled and put to rest was bourbon.  That bourbon comes from a four grain mash bill – corn, rye, wheat and barley.  At the moment it’s about two and a half years old, but the Freys made one thing clear:  they will not sell a whiskey younger than four years old.

“Right now it shows extreme potential.  When we try it at four years, if we think it needs more time, we’ll let it age,” Frey explained as we tasted their bourbon.  I have to say, it’s pretty enjoyable at the moment.  Being such a young age, the bourbon is grain forward, but not sharp.  Instead, like the majority of the other whiskies I sampled at the distillery that day, I found it rich and flavorful with lots of vanilla and light caramel. 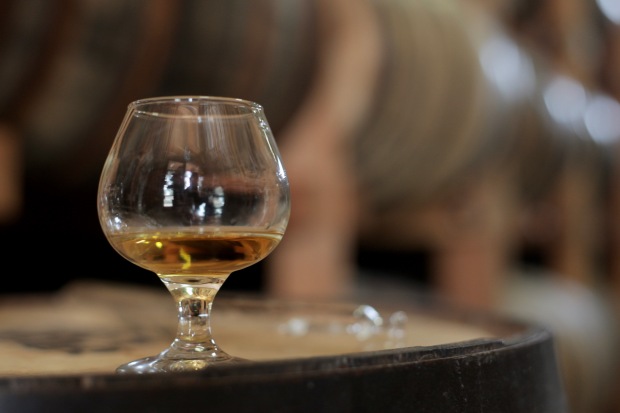 Only grains grown on Frey Ranch Estate are used in production of their spirits.  Grain-wise, the Freys are growing corn, wheat, rye, barley, and oat on their farm.  That, and the fact that Colby likes to tinker and experiment, allows for the production of other whiskies.  In addition to bourbon, the Freys have distilled a rye whiskey, wheat whiskey, oat whiskey, malted corn whiskey, and malt whiskey.  That last one has a light peating level.  What’s interesting is the peat is made on the estate from decomposed corn stocks.

In addition to their more traditional bourbon, a unique bourbon is also aging in the warehouse.  For this particular whiskey, the four grains used in their standard bourbon – corn, rye, wheat, and barley – are all malted on-site and used in the mash bill.  A malted bourbon?  I wasn’t sure what to call this whiskey, but it’s just bourbon (thanks for the insight, Chuck).  Compared to their more traditional bourbon, this whiskey is still fairly young and has a long maturation ahead of it.  The whiskey itself was rather interesting.  I mean that in a good way.  It had an earthy quality their standard bourbon didn’t have.

Having sampled their range of whiskies, I found that none had that “green” taste.  You know, that young, brutish, sharp character found in a lot of craft distillery whiskies.  Even though most were still very young, the whiskies had backbone.  That can be attributed to the attention and care in not only in the fermentation and distillation of the spirits, but also to the generations of know-how the Freys have instilled in their farming techniques. 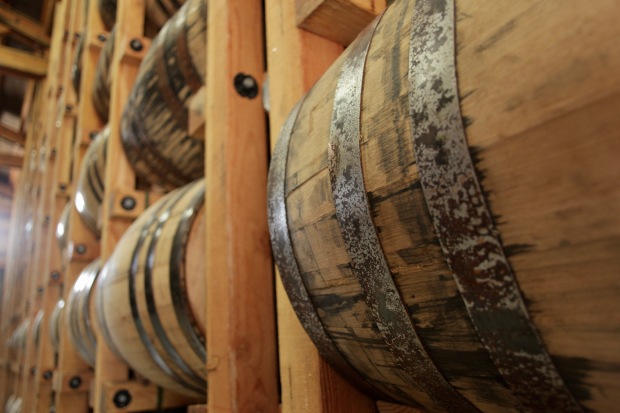 Everything comes from and is done at the estate.  Everything.  Growing grains, malting, fermenting, distilling, maturing, and bottling – everything.  I’ve never seen anything like it, and I can’t help but appreciate the conviction with which the Frey family are approaching the distillation of spirits.

“There’s a saying in the wine industry that you gotta like what you make because you might end up drinking it all yourself.  So we want to make sure we like it before we bottle it.  We don’t want to do anything to even remotely sacrifice our reputation for having quality products.”

The distillery trip was entirely paid for by Frey Ranch Distillery.  Thanks to the Freys and Argentum for the wonderfully educational weekend in Reno.  As always, all thoughts and opinions are my own.

I don’t make it a habit of reviewing vodka and gin here on this site.  After all, the site’s called “Adventures In Whiskey.”  However, I think it’s a good idea to throw in an unaged spirit every now and then.  As I was coming up with that thought, the folks at Reno’s Frey Ranch reached out to see if I’d be interested in trying their vodka and gin.  Perfect timing.

Opened in 2010, Frey Ranch is a fairly new distillery, though it’s Nevada’s oldest legal distillery.  Right now they offer a vodka, absinthe, gin and a new barrel-aged gin.  While they do distill whiskey, it’s still aging and should be available shortly.

Since I don’t drink a lot of vodka or gin, I won’t be scoring these.  Instead, I’ll only provide some tasting notes.

The vodka is made from corn, wheat, rye and barley – all grown on the estate.  It’s distilled to 196 proof and bottled at 80 proof.  The nose features a bit of rubbing alcohol at first, easing into very feint grain and grain notes.  The palate is on the sweeter side, with light grain, vanilla and floral notes.  The finish is pretty short.  Overall, it’s one of the more pleasant vodkas I’ve had.  It’s not rough-around-the-edges like so many, and leans slightly on the sweet floral side of things.

Frey Ranch’s gin is distilled from grains grown on the estate.  It’s flavored with juniper berries and sagebrush also sourced from the ranch, along with other botanicals.  This one’s bottled at 90 proof.  The nose is very herbal and medicinal, with a touch of perfume. The juniper berries really come through, but don’t dominate.  The sagebrush is also a big contributor here.  Taste-wise, this gin is spicy and herbal, with juniper berries, white pepper, anise and spearmint.  The finish is rather refreshing and minty.

Though I still prefer my spirits to sleep in barrels, these offerings from Frey Ranch are nice.  I can’t wait to see how their whiskey turns out.

Thanks to Frey Ranch for the samples.  As always, all thoughts and opinions are my own.

Tonight’s @wwe Wrestlemania pour. #highlandpark #wrestlemania37
I hear the next big thing is bourbon barrel-aged dogs. 🐶🥃
Love sampling some of the creative cocktails created by some of this year’s World Class participants. The batched cocktails in the photo are OCEAN BREATHES SALTY (featuring @donjuliotequila, salted grapefruit cordial, and thyme) and SAGE ADVICE (featuring @tanqueraygin, caramelized lime cordial, and sage coconut water). Absolutely delicious! @worldclassus
New post is up on the blog! We’re ending this year’s Women’s History Month with a look at Jane Walker by @johnniewalkerus 🥃 #janewalker #johnniewalker #whisky #blendedmalt