The initial 11-year-old release received mixed, but generally positive, reactions. I haven’t tasted it, so I can’t chime in just yet.  However, Heaven Hill whiskies have never disappointed me and I do have a healthy sample of the new 9-year-old release in front of me, so…

The nose here is classic wheater, with hints of sweet kettle corn, spice, orange peel, dark chocolate, and a touch of toasted oak.  On the palate, the whiskey is beautifully balanced and carries its 9-year age statement with class.  On entry, a velvety wave of sweet caramel corn washes over the tongue, developing notes of creamy vanilla and soft cinnamon and nutmeg.  A bit of oak and dark roast coffee arrives late and right before the finish.  The hearty 100 proof almost guarantees a warm finish, and this iteration of Old Fitz doesn’t disappoint.  The medium-long finish leaves behind notes of caramelized orange peel and oak.

Heaven Hill has crafted a very solid release in this 9-year-old bonded Old Fitzgerald.  Though not the most complex bourbon I’ve tasted recently, this whiskey does hit all the right wheated bourbon notes to make for a throughly enjoyable pour.  For the suggested price of $89.99, I’d gladly reach for a bottle.  8.5/10 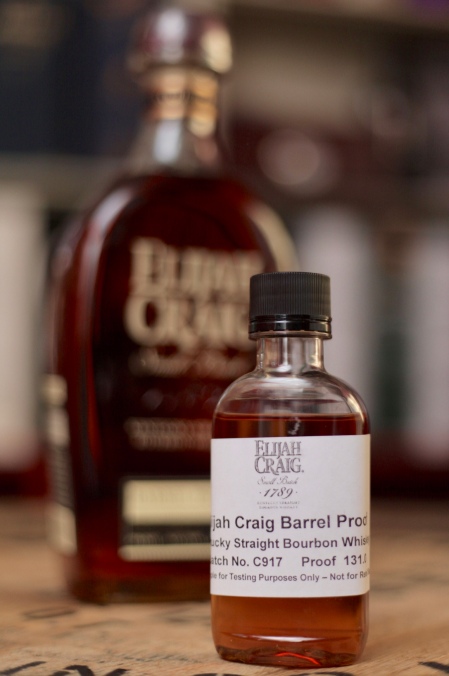 The 12-year-old cask-strength powerhouse known as Elijah Craig Barrel Proof is hard to beat. It usually delivers an utterly delicious concentration of classic bourbon aromas and flavors that is almost impossible to pass up at $60 a bottle. The third and last release of 2017, batch C917, is bottled at a respectable 131 proof.

Batch B517 was an outstanding release in what is generally considered a very consistently solid line.

Back to the whiskey at hand.

The nose on Batch C917 features hints of sweet oak, molasses, grilled corn cakes and some spice.  On the palate, big, bold waves of caramels and spice cake almost overwhelm the senses.  Hints of cardamom, vanilla, and dark chocolate pop through mid-palate.  A nice, strong dose of oak, an expected note in the Elijah Craig brand, and leather hit the palate late.  The finish is long and warm, with a bittersweet note reminiscent of caramel-coated dark chocolate lingers.

Heaven Hill has another lively and fantastic bourbon release with Elijah Craig Barrel Proof Batch C917.  It does what a great barrel proof whiskey should do – transport you to a Kentucky rickhouse with every sip. I slightly prefer the previous batch B517 over this one.  The differences are minute.  Bad batches of Elijah Craig Barrel Proof simply don’t exist.  Recommended! 8.5/10 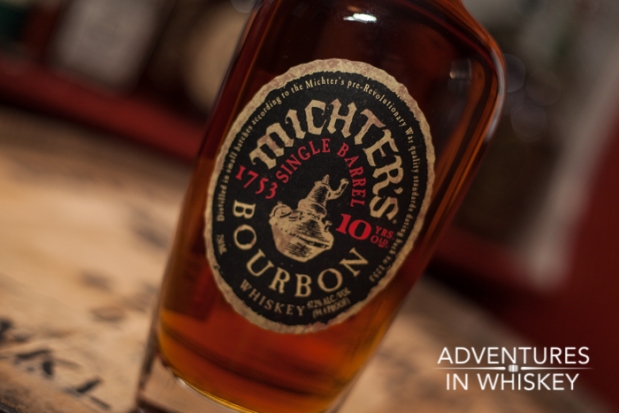 December 2015 saw the last release of Michter’s 10-year-old single barrel bourbon (read my review of that here).  I enjoyed it so much I named it one of my favorite whiskies of 2015.  Now, just five months later, Michter’s announced the next release of their 10-year-old bourbon.  That’s a pretty quick turnaround, and a welcome one, especially for whiskey enthusiasts who weren’t able to pick up a bottle.  These tend not to stick around on shelves.

“I love our 10 Year Bourbon and wish we could sell it year-round, but we just don’t have enough,” said Master Distiller Willie Pratt of the 2016 release. 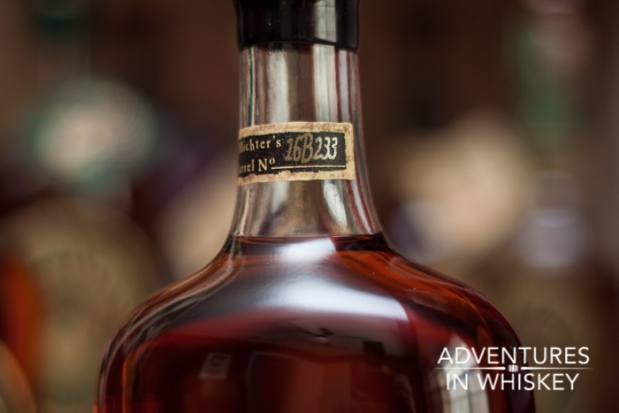 This particular barrel of Michter’s 10-year-old bourbon has a rich, sweet nose.  Sweet corn pudding starts things off.  Dive in deeper and find some caramel, tobacco and some vanilla bean.   There’s some subtle cinnamon and clove upon entry, developing into a vanilla creme brûlée, slightly burnt caramel, almonds and dried orange peel.  That cinnamon spice from earlier pops back up a little stronger than it did on the entry.  Some oak tannins are present, but don’t leave too much of a drying effect until the longish finish, where a blast of vanilla coats the mouth, disappearing slowly and leaving behind a slightly dry oak. 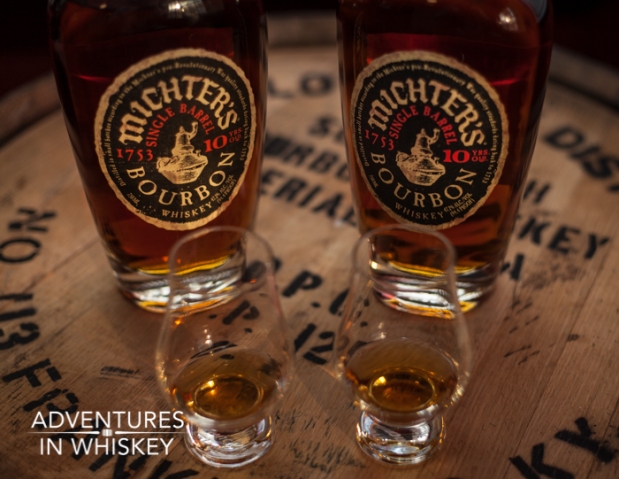 How does it compare to the 2015 release?

That’s a question I’ve been asked by several folks since posting a “head-to-head” picture on my Instagram account.  (Cheap plug – follow @adventures_in_whiskey on Instagram.)  Back to the point.  This is less a question of how this whiskey compares year to year.  More accurately it’s a barrel versus barrel comparison, as both are single barrel releases.

My 2016 bottle doesn’t have as much vanilla upfront on the nose as the 2015 bottle.  It develops a little later with a little airtime.  It’s also a bit more complex, especially with that nice tobacco note.  The 2016 release also carries a more corn-based aroma.  The palate and finish has more oak and vanilla, and generally less spicy than the 2015, which carried big cinnamon notes.

Both are fantastic bourbons with luscious, elegant and vibrant profiles.  Either one easily deserves a place in your whiskey shelf.  Love ’em or hate ’em, the folks at Michter’s release quality whiskey and this 2016 10-year-old bourbon is no exception.  Highly recommended.

9/10
michters.com
(Note: A review sample was provided by Michter’s.)