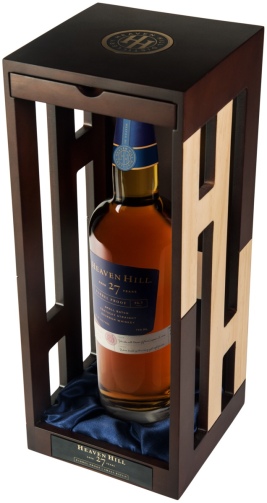 This fall, Heaven Hill is releasing a 27-year-old barrel proof bourbon. This would be the oldest bourbon I’ve tasted. That title was previously held by Orphan Barrel’s 26-year-old Old Blowhard.

The one-time release was distilled in 1989 and 1990 at the Old Heaven Hills Springs Distillery. For this bottling, 41 barrels were batched together. Thirty-six of those barrels came from the first and second floors. Maturation on lower floors of a warehouse is generally slower than barrels aging on the top floors. Temperature swings aren’t as varied on the lower floors.

The 41 barrels yielded less than 3,000 bottles. The angels took more than their fair share. After 27 years, those barrels didn’t have much whiskey in them. The proof after batching came to 94.7, or 47.35% abv.

After a few minutes of airtime, the nose is quite fragrant with hints of dark toffee, cloves,  dried fruit, and leather.  There’s a kind of dusty quality that develops, but it’s ever so slight.  On the palate, there’s an initial burst of dark chocolate-covered cherries.  Hints of slightly burned caramel, vanilla bean, and dried fruit soon develop, giving way to old oak, leather and spice – notably cloves and nutmeg.  I love the development of flavors on the palate.  The long finish is dry, with lingering notes of dried fruit and oak spice.

I’m quite surprised this bourbon isn’t over-oaked.  At 27 years old, there’s obviously a soft bed of old oak on which all other flavors play on, but the overall flavor profile is not dominated by oak. The folks at Heaven Hill certainly know how to craft an ultra-aged whiskey.   At an SRP of $399 a bottle, Heaven Hill 27-year-old bourbon isn’t a whiskey to shoot or rush through.  This old bourbon is elegant and requires your attention as you nose and taste it.  I hope to have the chance to buy a bottle when it’s released.  This is a must-have for fans of older whiskey.  9/10