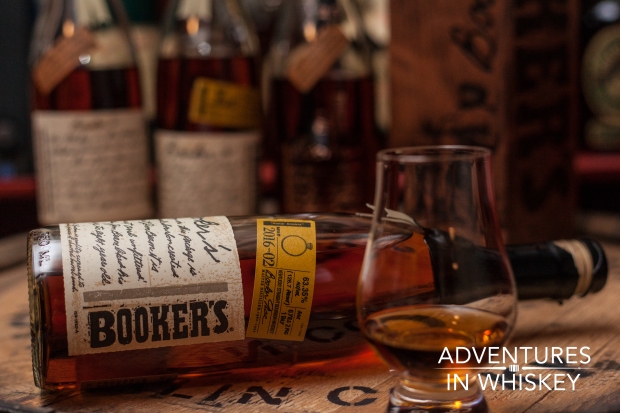 The second batch of Booker’s bourbon released in 2016 is called “Annis’ Answer”, honoring the day former Jim Beam master distiller (and this bourbon’s namesake) Booker Noe proposed to his wife Annis.  Since 2015, every batch of Booker’s is dedicated to one aspect of Booker Noe’s life, both professional and personal.

Booker’s is a barrel-strength bourbon.  Other than filtering out chunks of barrel wood, this bourbon is pretty much straight out of the barrel.  This uncut whiskey is usually aged between six and eight years.  Fred Noe, current Jim Beam master distiller and Booker’s son, said, “The batch is made up of barrels from four different production dates stored in 5 different storage areas. The oldest barrels in the batch were 7 years, 1 month old and the youngest barrels were 6 years, 2 month old.”

Batch 2016-02 is bottled at 126.7 proof.  Bourbon beginners might want to add a splash of water.  However, I think everyone should experience a barrel strength whiskey at least once.  Maybe take a few sips neat before adding water.

The nose is filled with robust vanilla, caramelized sugar, burnt orange peel, and charcoal over a hint of lavender.  Taste-wise, a tantalizing concentration of dark brown sugar, vanilla extract, fresh orange, and toasted oak.  The finish is long and warm with notes of cinnamon, vanilla and slightly drying oak tannins.

This is one of my favorite batches of Booker’s since “Dot’s Batch,” which was released early 2015.  It’s a tad more complex than the usual releases.  However, I haven’t run across a bad batch yet.  My reaction to Booker’s usually goes from “mmm… me likey” to “oh my God!”  The latter was from tasting Booker’s 25th Anniversary, one of my favorite bourbons ever.  Just like Annis said to Booker the night he asked her to be his wife, say “yes” to this batch of Booker’s.

8.5/10
bookersbourbon.com
(Note: A review sample was provided by Beam Suntory.)