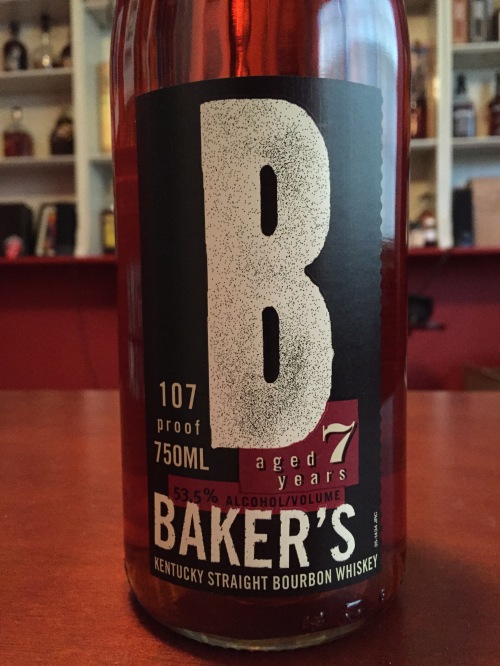 As part of Jim Beam’s Small Batch Collection along with Knob Creek, Booker’s and Basil Hayden’s, Baker’s bourbon seems to suffer from middle child syndrome.  I find it’s often overlooked and sometimes under appreciated.  Baker’s bourbon is a 7 year old 107 proof mountain of Jim Beam flavor.   Baker Beam is Jim Beam’s great-nephew and was a distiller at Jim Beam for a long time.  He is current master distiller Fred Noe’s uncle.

(The distillery’s PR firm sent a review sample.)  On the nose I get some vanilla, a touch of caramel, and a little banana.  There’s a little alcohol vapor that fades after a few minutes.  Baker’s has a nice medium mouthfeel, most likely due to its high proof.  This lends it to not be as watery as Jim Beam.  However, it does have that Jim Beam flavor turned up a notch or two.  I’m talking about vanilla, slight fruit, caramel and cinnamon spice.  It’s got a long, spicy and semi-sweet finish.

In essence, Baker’s is just a 7 year old Jim Beam bottled at 107 proof.  That’s a good thing if you like Jim Beam’s flavor profile.  It’s much closer to that flavor profile than say Booker’s or Knob Creek.  Also, don’t let the high proof scare you away.  This is easily drinkable neat, and not too shabby on the rocks.  A bottle of Baker’s will cost you north of $40.  Recommended.