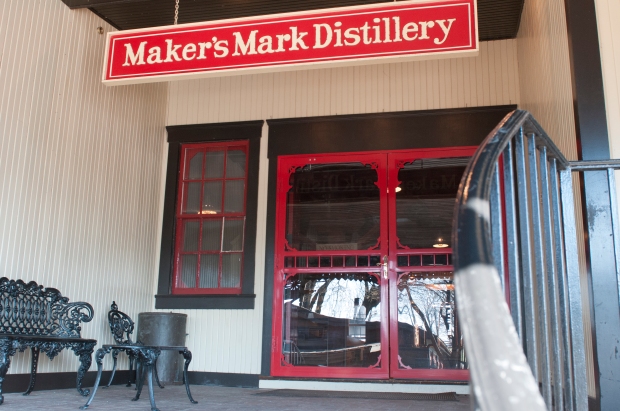 Back in the mid-1950s, Bill Samuels, Sr. bought a distillery in Loretto, Kentucky.  According to company lore, Samuels was trying to come up with a recipe for his whisky.  Distilling and aging whiskies with different mashbills takes years, time Samuels didn’t have.  He, or his wife Marjorie, depending on who is telling the story, baked several loaves of bread with different grain recipes.  The lone wheat bread was chosen as the best tasting.  From there, it’s said Julian “Pappy” Van Winkle, whose company distilled whiskey with a corn-wheat-barley mashbill, helped Samuels with a few wheated bourbon recipes.  A mashbill was settled upon, and distillation and aging began.

Marjorie is credited with coming up with the name “Maker’s Mark” as well as designing the label.  That iconic trademarked bottle hand dipped in red wax was also her idea.  The first bottle of Maker’s Mark came off the line on May 8, 1958 at 90 proof.  Maker’s Mark has been priced at a slight premium compared to others, and it was marketed that way. 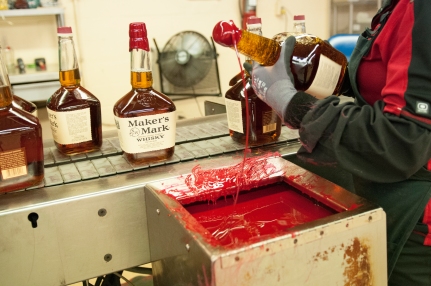 Maker’s Mark is one of the only distilleries that routinely rotates its barrels in the warehouses.  They claim it helps achieve more even aging and consistency in their whisky.  Their bourbon is bottled in small batches, which they describe as no more than 19 barrels.

For more than half a century, the stubborn Samuels family (Bill Samuels, Sr. passed the reigns to his son, Bill Samuels, Jr., who recently passed the torch to his son Rob.) only had the one product.  In 2008, their first new expression was released – Maker’s 46.  Standard Maker’s Mark bourbon was finished for several months in ex-Maker’s Mark barrels.  Seared French Oak staves were placed in these barrels, giving the bourbon an extra kick of vanilla, spice and boldness.

Then, in 2014, the company released a cask strength version of their standard Maker’s Mark bourbon.  Initially sold only at the distillery in 375ml bottles, Maker’s Mark Cask Strength can now be found in stores in full sized 750ml bottles.  Most recently, Maker’s 46 Cask Strength bourbon began selling at the distillery gift shop in 2015.  Let’s take a look their expressions. 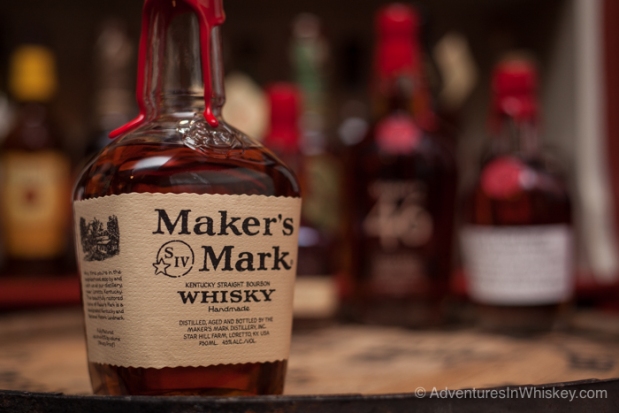 The lone bourbon expression from the distillery for more than 50 years, and the one that started it all, Maker’s Mark is bottled at 90 proof.  It’s available just about everywhere for about $24.99 for a 750ml bottle.  I’d best describe the standard Maker’s whisky as sweet and soft.  The nose is saccharine sweet, with vanilla and light-brown sugar as the dominating aromas.  Far in the background is a bit of sweet corn and just the slightest touch of oak.  It is not complex, but what’s here is nice.   The first thing that hits you on the palate is brown sugar.  The ever-present bourbon vanilla note is strong here as well.  Some slightly drying oak shows up towards the back of the palate, into a short, clean finish.  I see why lots of people are fans of Maker’s Mark.  It’s a classic, simple bourbon that will please anyone just getting into American whiskey.   For my taste, I prefer something with a little more spice and complexity.

Initially released in 375ml bottles, Maker’s Mark Cask Strength (MMCS) arrived to mostly positive reviews.  I always thought the standard Maker’s was just okay.  When I saw this bottle sitting on a shelf, 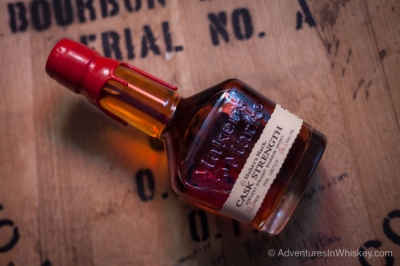 I picked it up.  Several months later, MMCS rolled out across the country with full sized 750ml bottles, retailing for a suggested price of $59.99.  My bottle is from batch 14-02.  It’s a full strength 113.3 proof. As expected for barrel strength whisky, the nose here is concentrated.  The same notes found in the standard bottling – brown sugar and vanilla sweetness – is found here, but in a more robust fashion.  Also here is a small mint note I don’t find in Maker’s Mark.  Taste-wise, the higher alcohol slightly tingles the tongue, but also explodes with a blast of flavors.  Vanilla, light brown sugar and a bit of orange peel parade around your mouth.  Like the standard Maker’s, MMCS brings about some drying oak before heading into a much longer finish.  It’s warming and has a bit of a nutty and creamy caramel note.  MMCS is about double the cost of the standard Maker’s Mark.  It’s a much bolder bourbon, mainly because of the higher proof.  I prefer it to the base expression hands down.  It’s still not the most complex bourbon around, but drinking this is a much richer experience. 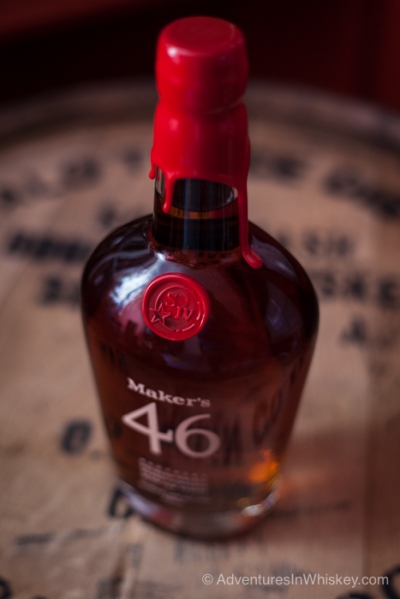 After about a year and a half of experimenting with different methods of  coming up with richer version of Maker’s Mark, the folks at the distillery, led by Master Distiller Greg Davis, finally came up with something they liked.  Maker’s 46 is a bourbon that’s finished in a secondary barrel.  Fully matured Maker’s Mark, aged between 6 and 7 years, lives a short life in a used Maker’s Mark barrel lined with 10 seared French Oak staves.  After a few months, that bourbon is ready to be bottled as Maker’s 46.  I like that it’s bottled at 94 proof, which is slightly higher than the standard Maker’s Mark’s 90 proof.

Those French oak staves are immediately apparent on the nose.  Oak is displayed prominently, compared to Maker’s Mark.  The vanilla note is also stronger, and comes across as creamy French vanilla ice cream.  The slightest tinge of ground cinnamon and nutmeg round out the sweet, rich nose.  The palate is equally rich.  Vanilla extract, whipped cream, sweet cinnamon bread (without the spiciness) and oak tannins almost make this whisky taste like a decadent dessert.  The medium-length finish introduces a small citrus note alongside slightly drying sweet oak.  My only complaint is that, even though it is 94 proof, Maker’s 46 seems to be a bit thin in the mouthfeel.  That might be addressed in the cask strength version.

This is a great expression!  A slightly spicier and richer version of Maker’s Mark is what the distillers were going for, and they succeeded.  Retail here is $34.99, about $10 more than the standard Maker’s.  I think it’s definitely worth the slightly premium.  There’s just so much to like here. 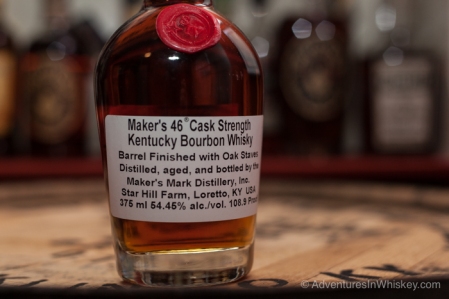 The newest expression from Maker’s Mark, Maker’s 46 Cask Strength hit their distillery gift shop in 2015.  Though it’s only (currently) available in 375ml bottles, Maker’s 46 CS hit the hands of enthusiastic fans to mostly positive reviews.  The first batch released is 108.9 proof.  With higher alcohol content comes more concentrated aromas.  Where Maker’s 46 smelled like a rich dessert, Maker’s 46 CS comes across as a candied version of that same dessert.  There’s a big syrupy-ness about it.  Those vanilla, oak and baking spices are still present, but they are fighting through a wall of sweetness to be noticed.   On entry, the higher proof provides a slightly more viscous whisky and tingles the tongue.  Maple syrup and  creamy vanilla lead the palate, with a drying oak note popping up towards the end of the experience.  The finish here is long, with sweet vanilla, ground cinnamon and slightly drying oak.

Thankfully, the palate wasn’t as sweet as the nose.  As a barrel proof whisky, this takes the standard expression qualities and turns them up to 11.  Also of note, there was no big alcohol note sometimes associated with barrel strength whiskies.  Great job by the folks at Maker’s Mark.  Pick up a bottle next time you’re in Loretto, Kentucky.  Highly recommended.

(Thanks to Maker’s Mark of the samples of Maker’s 46 and Maker’s 46 Cask Strength.)