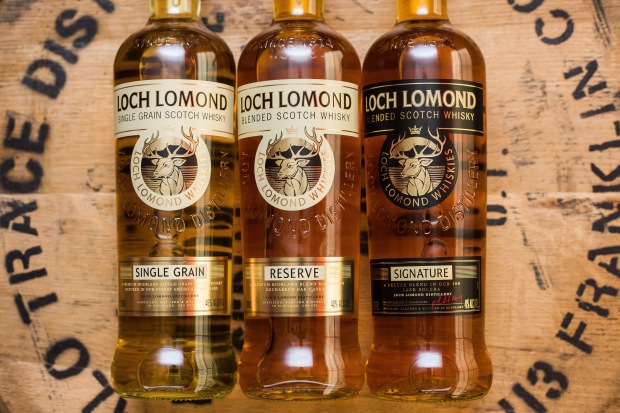 This past September, the Loch Lomond Group brought a large part of its whisky portfolio to the United States market.  Today, we’re looking at two Loch Lomond blended whiskies alongside a single grain bottling.

The Loch Lomond Group currently owns two distilleries: Loch Lomond in the Highlands and Glen Scotia in Campbeltown.  Something interesting about the Loch Lomond is it’s setup of stills.  It has a pair of standard pot stills.  Then, it has three pairs of pot stills with rectifiying heads as well as a continuous still.  The distillery only uses that column still to distill malted barley, which is what Loch Lomond Single Grain is made of.  It’s not a single malt, because single malts can only be distilled in pot stills.

Let’s talk about the three whiskies this post is featuring.  We’ll start with the cheapest – Loch Lomond Reserve.  At $19, Loch Lomond Reserve is a standard blend of malt and grain whiskies, married in re-charred oak casks.  It’s bottled at 40%, and tastes like a standard blend.  The nose has hints of light toffee, some floral and grain notes, and a touch of vanilla.  The entry is soft, and follows the nose closely: some grain, caramel, heather and vanilla.  The finish is short and soft, leaving behind a semi-sweet toasted grain note.  There’s not much going on with this one.  It’s not a bad blend.  Rather, it’s an easy-going blended whisky that’s probably meant for people wanting to get into whisky for cheap. 6/10

Up next is Loch Lomond Signature, which is priced $2 higher than Loch Lomond Reserve for $21.  If you’re looking for a decent blended whisky to start your whisky journey, I’d bypass the Reserve completely and reach for Signature as it tastes a bit more expensive than it actually is.  This blend is married in a 100 cask solera system, combining recharged Oloroso Sherry casks and American oak casks.  The still-soft nose is fruiter thanks to those sherry casks, featuring stewed fruit, raisins, some vanilla cream and buttered toast.  Loch Lomond Signature is also bottled at 40% abv.  The palate is still soft, but not as subtle as the cheaper Reserve.  Vanilla cream, berries, raisins, and light brown sugar make up the majority of flavors.  There is also a touch of young grain and spice.  The short finish features a touch of spice and stewed fruit.  7/10

Lastly is Loch Lomond Single Grain, bottled at 46% and priced at $29.  I appreciate the higher abv.  Like I mentioned before, this single grain release is made with 100% malted barley distilled in a column still instead of a pot still.  That is the only thing keeping this from being called a single malt.  On the nose, I get fresh cereal grains, ground cinnamon, and a touch of vanilla.  Taste-wise, there’s pineapple upside-down cake, vanilla, granny smith apples, lemon zest, and a bit of vanilla ice cream.  The finish features some spice along with orchard fruits and vanilla cream. 7/10

These releases are pretty standard.  I’d skip Loch Lomond Reserve and stick to Loch Lomond’s Signature and Single Grain releases.  Both are a lot more interesting in their own way, and are very affordable.
Thanks to Loch Lomond for the samples.  As always, all thoughts and opinions are my own.