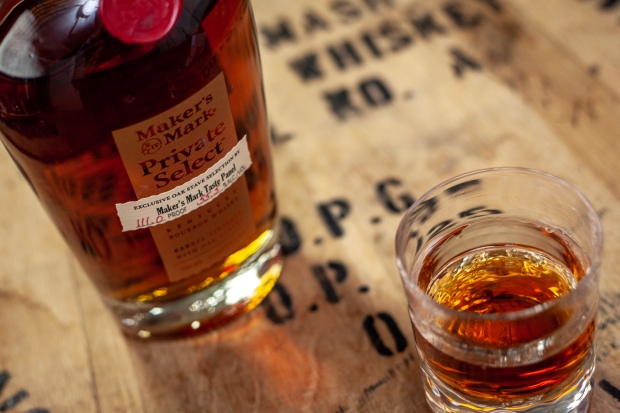 Lots of distilleries offer a single barrel program. Customers either travel to the distillery to choose a barrel or have barrel samples sent to them. Either way, they are usually choosing from a selection of three barrels. Maker’s Mark offers a much more immersive, personalized program, called Private Select.

Instead of just picking a barrel, customers choose how their whisky is finished by selecting a combination of five different oak staves:

Customers taste whiskies finished with each stave, and begin creating a flavor profile by blending these whiskies in different portions. The resulting combination of 10 staves is then added to a barrel of Maker’s Mark whisky and stored in the distillery’s new cellar for about nine weeks.

Bottled at 111.0 proof, this Private Select boasts a rich, fruity nose featuring hints of dark brown sugar, baked apples, and some baking spice.  On the palate, an initial wave of soft spice peppers the tongue but is cushioned by decadent vanilla cream and vibrant orange zest that soon follows.  Cocoa dusted apples and a touch of astringent oak show up on the back of the palate.  The long finish is a tad spicy with a lingering dark roasted coffee note.

After having attended a selection for the New Orleans Bourbon Festival earlier this year (more on that later), I have to say it was one of the most immersive tasting selections I’ve experienced.  That pick, which I tasted recently and will review in full soon, was a completely different whisky than the whisky tasted here.

Speaking of immersive, the brand’s new ad that just launched on Youtube is pretty cool.  Make sure to use your mobile device for the best result.  I don’t know of any other VR ads out there right now.

Back to the whisky, I find the Maker’s Mark soft, sweet profile acts as a strong base in which to showcase the flavors brought about by the unique oak stave finish.  I’ve only tasted two of these whiskies, and both were outstanding.  In this case, the Roasted French Mocha staves add just the right amount of rich, dark notes that play with the caramel notes brought about by the Seared French Cuvee staves.  Nicely done here.  If you haven’t tasted a Maker’s Mark Private Select, you’re really missing out on something special.  8.5/10

Thanks to Maker’s Mark for the sample.  As always, all thoughts and opinions are my own.