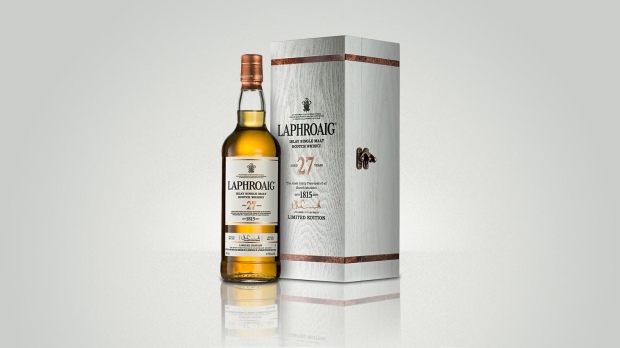 Laphroaig ends the year on a high note with the release of its 27-year-old single malt. This expression is the latest entry in the brand’s Super Premium series, following exquisite 32-year-old and 30-year-old whiskies, released in 2015 and 2016, respectively. For this 2017 release, whiskies matured in refill hogsheads were transferred to first-fill ex-bourbon barrels and refill quarter casks. After more than a quarter century of maturation, Laphroaig 27-year-old is bottled at 83.4 proof, or 41.7 ABV. It would be safe to assume this is cask strength given its random proof.

The whisky carries rich aromas of tropical fruit, leather, peat, citrus, and vanilla. On entry, vanilla cream develops into key lime pie, tobacco leaf, and tropical fruit punch. Hints of earthy peat and smoke begin gently piercing though but don’t overpower the other flavors. Of note is the whisky’s oily mouthfeel, which coats the palate in flavor. Though Laphroaig 27-year-old is a low 83.4 proof, it doesn’t present itself as thin or watered down. The finish is long and slightly warming with a citrus-tinged smoky character.

If you haven’t already guessed, I’m a fan. Laphroaig has another winner on their hands with this release. It is a satisfying, well-matured, and balanced whisky. Laphroaig lovers with deep pockets ($750 a bottle) should seek this out quickly, as it’s a one-time release. Highly recommended! 8.5/10

Thanks to Laphroaig for the sample. As always, all thoughts and opinions are my own.