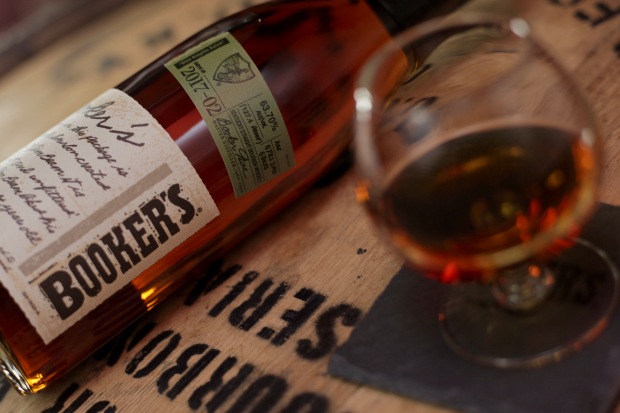 The second of 2017’s four batches of Booker’s bourbon has been released.  Last year saw owner Beam Suntory announce a price hike (now $70 – $75) and a reduction in the number of batches of the cask-strength bourbon released each year.  The new batch, “Blue Knights Batch,” is named after the Blue Knights, an organization of retired and active law enforcement officers who love motorcycles.  What does that have to do with Booker Noe?  Well, as you guessed – there’s always a story involving Booker.  Many years ago he was invited to take part in a Blue Knights rally near the distillery.  Ever the friendly soul, Booker ended up invited about 300 members to his house for a BBQ lunch the next day.  Booker’s son and current Jim Beam Master Distiller Fred Noe said, “You can imagine Mom’s face when he told her at breakfast the next day. But, that was Dad – larger-than-life and always making new friends.”  The entire local chapter of the organization showed up for lunch, and it became an annual tradition for years.  Booker was even named an honorary member.

This batch of Booker’s comes in at 63.7%, or 127.4 proof.  The youngest whiskey in the batch is 6 years, 3 months, and 6 days old.  Barrels were pulled from four different warehouses.  Noe says a few barrels were more than nine years old.  Blue Knights Batch is as robust as you’d expect, with hints of charred sweet corn, vanilla bean, cinnamon-spiced caramel and oak on the nose.  The palate comes across as rich, but has moments of vibrancy.  Big notes of vanilla pudding, sweet buttered corn bread, slight nuttiness, and maple syrup give us the rich side, as a touch of citrus and wood spice add some sparkle.  The backend has some bitterness, courtesy of charred oak.  The long, warm finish is what fans of Booker’s have come to expect.  There are a few lingering notes of orange peel, vanilla and oak tannins.

Booker’s is typically a powerful barrel-strength bourbon, and this batch easily fufills its role.  Ever so full of character, Booker’s 2017-02 still tastes like “Booker’s,” but offers a slightly more straight-forward, leaner tone.  I didn’t pick up some of the herbalness past batches offered.  Rather, the classic bourbon notes of vanilla, caramel and oak shine.  It’s a nice batch, and it’s always refreshing to see slight variations on the Booker’s house style.  8/10

Thanks to Beam Suntory for the sample.  As always, all thoughts and opinions are my own.

In all of the madness of the last couple of weeks, I forgot to mention - one of my really early reviews was referenced in a book! First time I’ve seen my name in an index. Now I want some Jack Daniel’s Sinatra Select!
This week’s #tbt is a little different. My mom passed away this past weekend. In the midst of grieving and making arrangements this week, I came across this old photo of my parents back in ‘77. It’s one of the very few times my mom had a drink.
It’s not quite #TeleTuesday, but I am noodling on a new Telecaster and sipping a little of the new Evan Williams 1783 Small Batch. 🥃🎸
Excellent! The new 2021 release of 10-year-old bourbon from @michterswhiskey just arrived. Can’t wait to pop open this one - past bottlings have been among my favorite annual releases. 🥃