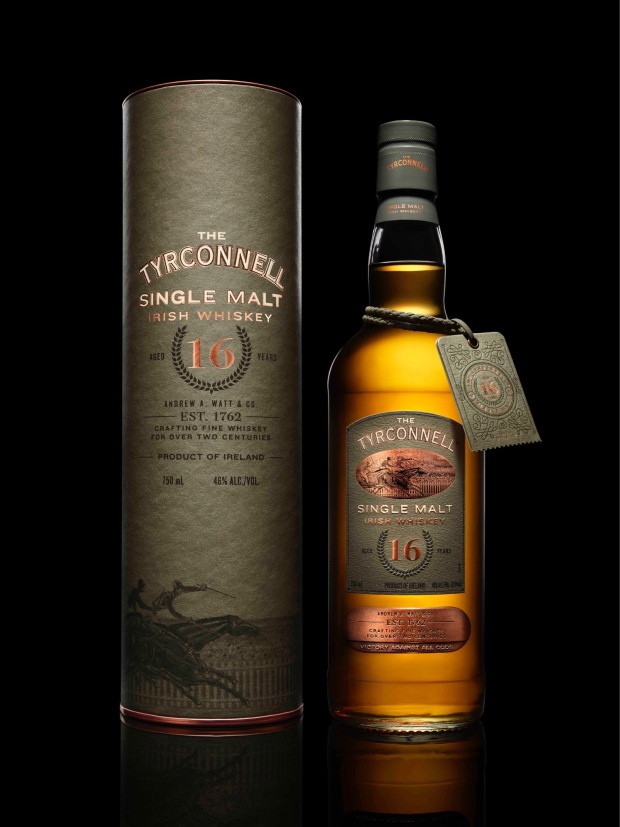 A limited edition 16-year-old Tyrconnell Single Malt.  Have I got your attention?  It definitely has mine.

Tyrconnell, produced at the Cooley Distillery, is one of the few Irish whiskies that is double-distilled, as opposed to the more traditional triple-distillation utilized in other Irish whiskies.  This 16-year-old expression was matured in American ex-bourbon barrels, so I’m expecting some creaminess and vanilla.  It’s also bottled at a healthy 46% abv.

The nose is full of fruit, especially cinnamon apples and tropical fruit.  There are also hints of grassiness, vanilla bean, and ripe grapefruit.  Honestly one of the fruitiest noses I’ve come across in quite a while.  The palate closely follows the nose with crisp orchard fruits bursting upon entry, only to reveal some mango and honeydew.  A slightly creamy spiced caramel adds some richness.  I agree with the official tasting notes on the finish:  “a very long, herbal spice-rich finish.”  Specifically, I’m picking up a little dried thyme, ginger and a touch of black pepper.

The development of this whiskey is beautiful.  A lovely fruity nose and initial entry, then developing into some rich caramel followed by that herbal/spice finish.  Sadly, there’s not a lot of this stuff to go around.  It’s available in select markets for about $100/bottle.  I’m hoping it comes to New Orleans.  I really need to find a bottle of this lucious, fruity whiskey.  Highly recommended.  9/10

Thanks to Tyrconnell’s PR firm for the sample.  As always, all thoughts and opinions are my own.