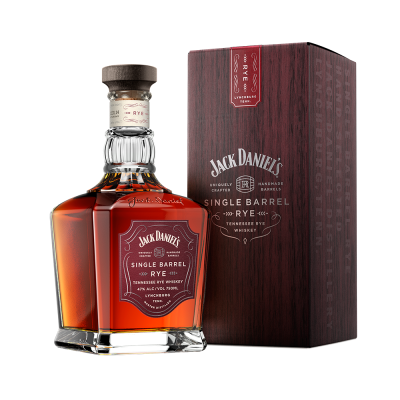 During the summer of 2014, I had a chance to talk to Jeff Arnett, the Master Distiller of Jack Daniel’s.  Towards the end of the brief interview he mentioned the upcoming rye whiskey release.  Fast forward a year and a half to March 2016, and Jack Daniel’s Single Barrel Rye (JDSBR) begins hitting shelves.

This rye expression is the distillery’s first new mashbill in 100 years.  Like Arnett stated in that interview, the mashbill is broken down to 70% rye, 18% corn and 12% malted barley.  The high percentage of rye grain should show up in the nose and palate.  Considering their traditional mash bill is 80% corn, 12% malted barley and 8% rye, it’s apparent the company wants to showcase a big rye note in the final product.

JDSBR is bottled at 94 proof and is the newest addition to the Jack Daniel’s Single Barrel lineup.  It offers no age statement, which is consistent with every other offering from the distillery.  Arnett says, “You never want to over-barrel a rye whiskey so it was important for us to stay true to the style of grain forward character rather than barrel character while still allowing our barrels to interplay with the whiskey.”

There has been some talk online about wide barrel variation for Jack Daniel’s Single Barrel Barrel Proof, the company’s last release.   Some folks claim their whiskey was not of quality, whereas I tasted whiskey from two different barrels and found both to be delicious.  I’m curious to see how this new offering will fare.

Although the mashbill has changed, the nose is unmistakably a member of the Jack Daniel’s family.  Rye grain leads off the nose, followed by familiar JD notes of sweet caramel, banana, and a little oak.  The entry is a mixture of sweet and spicy.  Rye grain is showcased nicely, providing that spiciness and a bit of sharpness.  Caramel and that JD banana note add sweetness and some richness.  The oak note comes in close to the medium-length finish, which is a touch astringent and leaves behind a sweet note.

You know, Jack Daniel’s Single Barrel Rye is pretty darn good, especially for the suggested price of $49.99.  It’s pretty much what I expected from a JD rye whiskey.  It keeps the JD characteristics, but focuses on the rye grain.  Arnett and his team have not allowed the barrel influence to dominate the whiskey.  Assuming the whiskey makers are picking great barrels, I have a feeling this will be a hit for the company.

Give this one a chance.  I think you’ll like what you taste.

Hey look, it’s #nationalscotchday - time for a pour… 🥃
In all of the madness of the last couple of weeks, I forgot to mention - one of my really early reviews was referenced in a book! First time I’ve seen my name in an index. Now I want some Jack Daniel’s Sinatra Select!
This week’s #tbt is a little different. My mom passed away this past weekend. In the midst of grieving and making arrangements this week, I came across this old photo of my parents back in ‘77. It’s one of the very few times my mom had a drink.
It’s not quite #TeleTuesday, but I am noodling on a new Telecaster and sipping a little of the new Evan Williams 1783 Small Batch. 🥃🎸