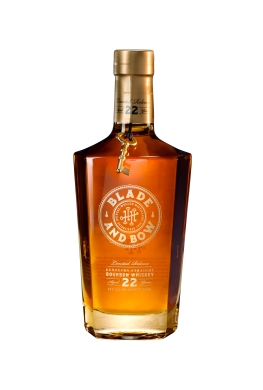 Blade and Bow is the newest bourbon brand from spirits giant Diageo.  In addition to a standard offering, a 22-year-old limited release of Blade and Bow hit the market.  It is a blend of whiskies from the George Stagg Distillery(now Buffalo Trace) and Bernheim Distillery, all aged at Diageo-owned Stitzel-Weller near Louisville.  This one-time release comes in the same shaped bottle as the standard offering and is bottled at 46% abv for an SRP of $150.

On the nose, I first get some candied fruit, caramel apple followed by some dark brown sugar, cinnamon, vanilla and old oak.  The entry is a little soft and sweet with creamy dark toffee.  Then vanilla extract, toasted oak and cinnamon spice take over.  Outstanding, but it’s short-lived.  The oak becomes a tad heavy-handed on the finish and aftertaste.  The whiskey becomes a bit dry and bitter through the finish.  I prefer the 22-year-old Lost Prophet’s finish instead.  That bourbon’s finish is a little spicer, sweeter and less bitter & oaky.

I really liked Orphan Barrel Lost Prophet release when I first tried it, so I expected the same here.  Blade and Bow 22-year-old starts off great on the nose and entry with really nice flavors for an older bourbon, but it starts to falls apart on the finish.  There’s just too much bitter dry oak for my tastes.  All in all, a tasty, but slightly unbalanced, older bourbon.

8/10*
bladeandbowwhiskey.com
(Note: A review sample was provided by Diageo.)
*Edit (5/20/16) – Coming back to this bourbon almost a year later, I found the palate a bit richer and slightly more enjoyable than when I originally reviewed this bourbon.  The nose is lovely and aromatic, and something I could smell for hours.  However, that finish is still on the dry, oaky side, but not as horrible as I remember.  I’ve adjusted the score by half a point to reflect my thoughts on tasting this bourbon again.