Diageo is packing a one-two punch in the American Whiskey world.  Recently, the I.W. Harper brand was reintroduced to the United States after a 20 year absence.  Now, their newest brand, Blade and Bow, is their homage to the Stitzel-Weller Distillery.  Blade and Bow is entering the market in two forms:  a 22-year old, one-time release and a no age statement general release.  Today, we’re looking at the general release.

Stitzel-Weller is a name whiskey enthusiasts are very familiar with.  Old Fitzgerald and W.L. Weller bourbons originated from that distillery.  It was owned by the company now known as Diageo when it closed in 1992.  Diageo owns some old Stitzel-Weller whiskey stock and utilizes it for Blade and Bow bourbon in an interesting way – using the solera process.  Think of solera aging as a pyramid of barrels.  At the bottom of the pyramid are barrels that contain old Stitzel-Weller whiskey.  The higher you go on this barrel pyramid, the younger the whiskey in the barrels.  So, the youngest whiskey (aged at least 6 years) is at the top.  A portion of the old whiskey from the bottom of the barrel is tapped for release.  That barrel is refilled from the next oldest barrel, and so on and so on.  No barrel is completely drained.  That means that a little bit of Stitzel-Weller whiskey is in every bottle of Blade and Bow.  My question is ‘how much is a little bit?’  My guess is not a lot.  The oldest bourbon here is from Stitzel-Weller.  We’re not told where the rest of it is sourced from.

As with most of Diageo’s releases, packaging plays a large part in having the whiskey stand out on shelves.  Blade and Bow comes in an elegant bottle with a key hanging from the neck.  Blade and Bow’s name represents the two parts of a skeleton key:  the blade shaft and the ornate bow.  The five keys in the logo represent the five steps of crafting bourbon:  grains, yeast, fermentation, distillation and aging.  There are five different keys, and of course, Diageo is encouraging consumers to collect all five.  This reminds me of the horse stoppers on bottles of Blanton’s.  At the bottom of the post are pictures of how media samples were sent out.

Packaging might get you to buy a whiskey once, but what’s inside the bottle will keep you coming back.  Blade and Bow bourbon recently won gold at the 2015 San Francisco World Spirits Competition, but how is it in my glass?  (Note: I was sent a small review sample by the company’s PR firm.)  The nose is light, but I pick up light caramel, toffee, toasted oak, pear, ginger and mint.  At 91 proof, Blade and Bow has a lighter mouthfeel than I expected.  Tastewise, it’s not overly sweet.  There’s  a black pepper note, and little fruit.  Some oak and sweetness creep up a bit at the end.  The finish is a dry, bittersweet oaky finish.

Overall, Blade and Bow bourbon is interesting.  It isn’t a heavy bourbon.  It’s a lighter style one.  The oak from the older bourbon blended into this comes through, but that may be all I’m getting from the old bourbon.  There’s a caramelized fruit-black pepper-toffee combo here that makes it a bit different than any other bourbon I’ve tried.  I’ll definitely be spending more time with this one.  A bottle will run you about $50. 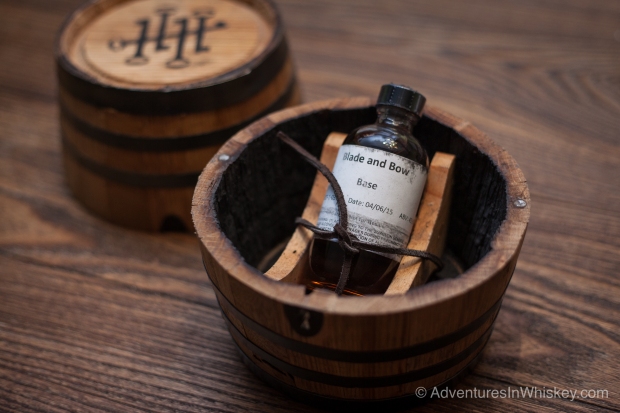 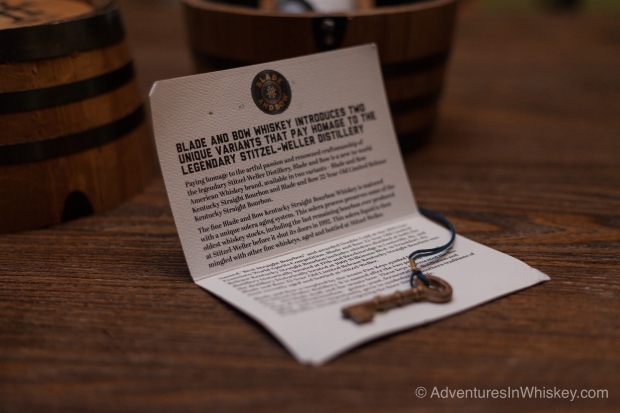