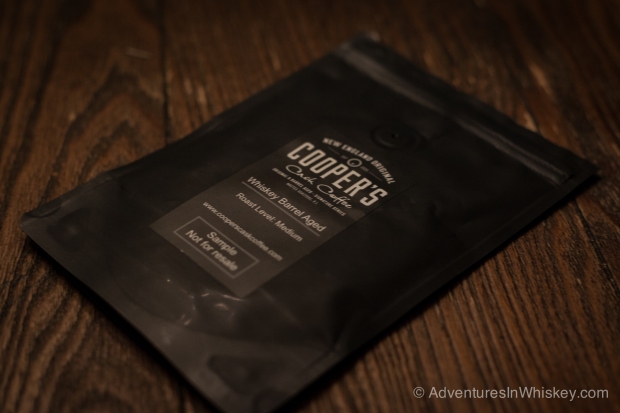 With Cooper’s Cask Coffee, earthy Sumatra beans are aged in recently-emptied single malt whiskey barrels from an independent distillery.  These are 10 gallon barrels we’re talking about.  The beans are then to a medium roast level.  The press release I received recommended brewing the coffee in a french press.  As I didn’t have that around, I went with the drip method.  The company’s pretty accurate tasting notes are as follows:

…earthy wood, fresh tobacco, with a hint of tropical fruit like dried papaya.  The body is full and heavy with a very long finish of the whiskey.

I also found a little toffee on the finish.  The long fruity finish stuck with me for a pretty good while.  All in all, not bad, but not something I’d reach for on a regular basis.  A cup here or there would suffice for me.  I tend to be a little more traditional with my coffee – just a tiny amount of sugar and sometimes a small splash of half & half.  This is the new company’s first batch.  It’s an interesting start, but I’d love to see what they release in the future.  Imagine what flavors would be imparted if Cooper’s Cask Coffee decided to use bourbon barrels instead of single malt whiskey barrels.