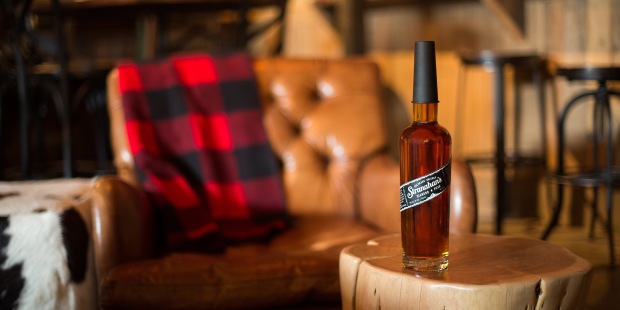 Although sales of Stranahan’s whiskey are growing, the Colorado distillery has played it smart by keeping their standard porfolio rather tight.  There’s the standard Stranahan’s whiskey, aged at least two years.  Then there’s Diamond Peak, a single malt with double the age of the standard.  The youngest whiskey in the bottle is four years old.

Stranahan’s distillery uses only malted barley, yeast and water to make their whiskey.   Only new American white oak barrels with a #3 char are used to mature the whiskey.  What emerges with time is essentially an American single malt whiskey, though there is no official designation for that category in this country.  I lightly touch on that subject here.

Bottled at 47% abv, Diamond Peak’s extra age comes across in the nose.  Hints of sweet malt and caramel dominate, complemented by cinammon, orange zest, and medium roast coffee.  The palate is bolder and more complex than the standard Stranahan’s.  Wonderful notes of figs, brown sugar, honey, sweet malt and dark fruits shine, while hints of grapefruit and vanilla emerge in the mid-palate.  Dark chocolate and a slight touch of oak develop and help balance out the whiskey.  The finish is long and warming, with dark brown sugar, figs and oak notes.

I like the standard Stranahan’s, and I think it does the job nicely.  But…  for sipping, I’d reach for Diamond Peak almost every time.  The nose and palate are richer, darker and feel like a more complete whiskey.  I really like what more age did to this whiskey, and can’t help but think what a six or eight year old Stranahan’s would taste like.  I can keep dreaming forever, but thankfully I can reach for this stuff in the meantime.  Nicely done!  8.5/10

Thanks to Stranahan’s for the sample.  As always, all thoughts and opinions are my own.

Stranahan’s Master Distiller Rob Dietrich wants the Colorado malt whiskey he and his team distills to be taken as seriously as a single malt Scotch.  Currently, there is no official designation for American Single Malt Whiskey in the TTB, the government bureau who oversees booze in our great country.  Sure, we have bourbon, rye, corn whiskey, grain neutral spirit, etc.,  but no American Single Malt.  Stranahan’s is made from malted barley, Colorado water, and yeast.  There are no additives, flavoring, or coloring added.  It’s all distilled and aged at their Denver distillery.   If that’s not a single malt whiskey, I don’t know what is.  Again, no American Single Malt designation.  Stranahan’s and several other American distilleries making malt whiskey are lobbying for change.

Single malts make up some of the most delicious and treasured whiskies in the world.  Layers of flavors build, forming nuances and complexities absent in other spirits.  That inspired the folks at Stranahan’s to go the malt whiskey route instead of producing a bourbon or rye whiskey.  The standard Stranahan’s expression is bold and full of sweet malt, vanilla and honey, appealing both to malt whisky and American whiskey drinkers who prefer a bolder character.  It’s at least two years old, befitting a “straight whiskey” designation.  But again, no official recognition or definition of American Single Malt Whiskey (I know, I’m starting to sound like a broken record).  Also on shelves is the 4-year-old Diamond Peak, which gives off more dark fruits, darker caramels and more spice than the standard expression.  In addition, every December fans go rabid over the release of Snowflake, a distillery-exclusive offering that explores cask finishing.

In the midst of appealing to the TTB, the folks at Stranahan’s still know how to have fun with their whiskey.  Attending their second annual Cask Thief Festival recently, I saw…rather, tasted, that fun firsthand.  Close to six hundered fans made their way to the festival this past weekend.  The event gave fans a chance to taste rare whiskies straight from the barrel at cask strength. This year featured a selection of six unique casks, as well as a barbecue and live music.  Each featured a departure from their standard house style through different cask finishes, further aging, or in one case, a brand new yeast strain.  I jotted down a few notes while I tasted.

Cask thievery. All samples were taken straight from the barrels with a copper cask thief.

Stranahan’s Master Distiller Rob Dietrich discussing the distilling process during a private tour of the distillery.

Alongside some kick ass barbecue and fantastic music, Stranahan’s Cask Thief Festival gave attendees a sneak peak at some of the experimentation going on at the distillery.  I’m a fan of experimentation in the whiskey world, and for the most part these expressions worked.  The level of finesse and skill showcased here should be applauded.  As the distillery grows, I do hope to see more of these releases reaching the hands of fans across the country.

Moreover, I completely back Stranahan’s and other American distilleries pushing for an official designation for an American Single Malt whiskey.  Rumor has it the major pushback is coming from across the pond in Scotland.  If that is the case, I would call it a petty move.  Scotch whisky is still king of single malts, and the handful of American distilleries making single malt whisky are a drop in the bucket and pose no threat to sales.  There are Scotch, Irish and Japanese single malt whiskies, so why don’t we have an American single malt?

A big thanks to Stranahan’s for my invitation to their Cask Thief Festival.  The entire trip was paid for by Stranahan’s, but that did not influence the contents of this article.  As always, all thoughts and opinions are my own.

Stranahan’s is a whiskey I’ve been wanting to try for a while now.  Each small batch made of 100% barley, and aged in new American oak casks for a minimum of two years in Colorado.  And a small batch it is.  Stranahan’s selects between 10 and 20 casks per batch.  This standard release is bottled at 94 proof.

The nose has a big honeyed malt character.  A touch of oak pops up, along with some stewed fruit.  The entry starts off mellow.  Some wood spice builds up a bit.  Honey and toffee notes ramp up, along with cereal grain and a touch of orange zest.  Stranahan’s is medium bodied, and doesn’t feel thin.  The tasting experience ends with a medium-long finish and a nice clove honey note.

Head distiller Rob Dietrich and his crew are crafting some delicious whiskey over in Colorado.  It’s definitely a different breed than other American whiskeys.  Going the barley route versus producing something with a corn-based or rye-based mashbill is commended.  This is a solid bottle of whiskey.  Recommended.

8.0/10
stranahans.com
(Note: A review sample was provided by Stranahan’s.)