Actor, comedian, woodworker, and America’s sweetheart Nick Offerman loves Lagavulin. After all, it was featured as the favorite whisky of Ron Swanson, Offerman’s iconic character on Parks & Recreation. He’s also starred in a series of whisky-related videos on Youtube. Let me reiterate: the man loves Lagavulin.

So much so that Offerman teamed up with Lagavulin distillery manager Colin Gordon to create his very own expression. The result is Lagavulin Offerman Edition, an 11-year-old single malt bottled at 46% ABV. As Mr. Offerman himself says:

I have traveled the world and sampled many attempts at pleasing nectars, but it is solely this distillation of Islay; a tiny, charismatic Scottish isle, that has claimed my palate. Yah, and my heart into the bargain.

On the nose, a blend of campfire smoke and grilled pineapple presents itself rather nicely. A sprinkling of kelp, red pepper and sweet oak round things out. The palate offers what I love about Lagavulin: a full-bodied, full flavored smoky malt. Hints of salted toffee meet a wave of campfire-like peat smoke. Grilled tropical fruit (I assume a lot of ex-bourbon barrel maturation here) bring an element of sweetness. The mid-palate offers a hearty helping of oak spice and sprinkling of dried fruit and dried herbs. The long finish is warming, sweet, and smoky.

Lagavulin Offerman Edition is a fantastic expression from the distillery. It comes across as bolder than the core 16-year-old offering, but not as intense as the annual 12-year-old release. Showcasing some of the whisky’s spicier notes was a good decision, and one that plays well with the big, smoky distillery character. At $74.99, Lagavulin Offerman Edition is a must buy for Lagavulin fans. I can’t think of a better pour during a Parks & Recreation binge session.

Thanks to Diageo for the sample. As always, all thoughts and opinions are my own. 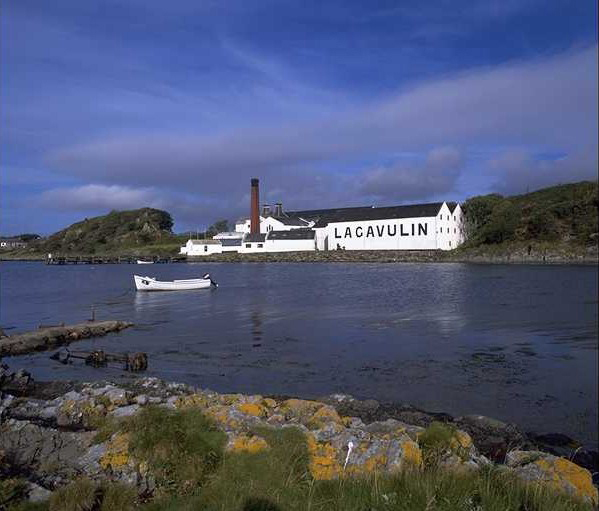 The distillery has been around legally since 1816, which makes 2016 it’s 200th anniversary.  It’s located close to Islay town of Port Ellen, which also was home to the legendary distillery.  That distillery closed its doors in the early 1980s.

Lagavulin’s core expression is a 16-year-old single malt.  The nose is rich, sweet and smoky.  I’d describe it as smoky first and peaty a distant second.  A strong orange rind note is also present, along with a touch of seaweed.  Toffee adds sweetness on the nose and the palate.  The entry is surprisingly not as sweet as the nose lends me to believe.  Smoke, brine and an herbal note start things off.  There’s a bit of peat here, but again, it seems to be a small contributor.  A nice burned orange peel and tropical fruit show up on the back palate.  The ashy smoke finish is long.  Even though it’s bottled at 43% abv, Lagavulin 16-year feels slightly anemic in terms of mouthfeel.

I like Lagavulin 16-year.  It’s richer, smokier, and heavier in character than it’s Islay cousin, Caol Ila.  Even better is the limited edition 12-year-old expression of Lagavulin.  I’ll give that yearly release a proper review in the future.  Back the the 16.  It’s really a nice pour of whisky, and while I don’t have any real complaints or nitpicks, I do wish it were bottled at a slightly higher proof.   Recommended.