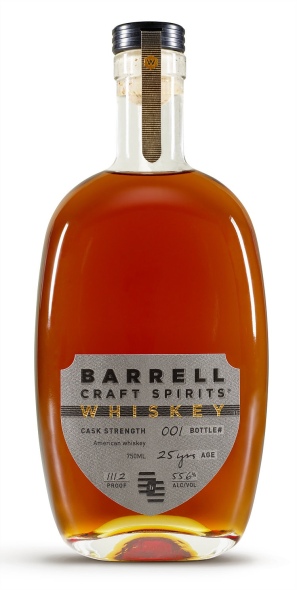 As part of its one-two-three punch of initial releases, Barrell Craft Spirits (BCS) has unveiled a marvelous 15-year-old bourbon, 13-year-old rum, and this 25-year-old American whiskey.  A quarter of a century is a helluva long time to age whiskey here in the U.S.  It’s quite rare, in fact.  And of those releases that do carry such a high age statement, even fewer are not dominated by oak.

BCS bottles everything at cask strength, non-colored, and non-chill filtered.  The company believes it’s the best way to present a spirit.  I don’t disagree.  This whiskey was distilled and aged in Indiana.  It’s American whiskey and not bourbon, which could mean used casks have been used for maturation or the mash bill wasn’t at least 51% corn.  The truth is we don’t know because BCS didn’t divulge that information.  They did say that after 25 years of aging, the whiskey was finished in Sercial Madeira casks.

First releases mean first impressions, and the bar by which the label will be judged by in the future.  How does BCS 25-year-old whiskey fare in the glass?  Unsurprisingly, quite well.

The nose carries hints of toasted oak, vibrant red fruit, spice, roasted almonds, and dark chocolate.  Some air reveals a bit of dark caramel.  At 111.2 proof, it doesn’t need much water, if any.  A burst of molasses is quickly joined by lime juice, toasted marshmallow, vanilla pod and sweet red fruit.  Baking spices develop, as does leather and oak, which begins drying the back palate.  The long, warming, and slightly dry finish leaves behind candied fruit, dark chocolate, and old oak.

The Madeira cask finish really brightens things up.  The sweet, vibrant fruit plays well with the heavier oak and spice notes.  We could have easily ended up with another oak-dominated, ultra-aged whiskey.  Instead, BCS 25-year-old whiskey presents a profile much more balanced than expected.  Nicely done.  8.5/10

Thanks to Barrell Craft Spirits for the sample.  As always, all thoughts and opinions are my own.