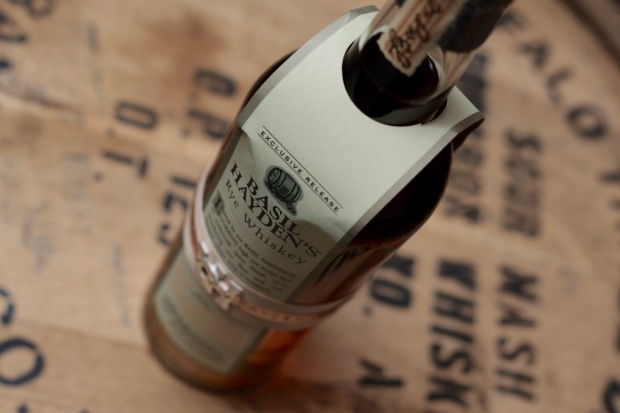 Last year saw the one-time Booker’s Rye variant of the Jim Beam’s Small Batch collection hit the market to high praise.  This year have Basil Hayden’s Rye.  Will it hold a candle to Booker’s Rye, or is it fair to compare?

During this year’s New Orleans Bourbon Fest, Beam Master Distiller Fred Noe told me he consulted with Laphroaig Distillery Manager John Campbell for some insight as to how they use quarter casks.  The resulting whiskey is Basil Hayden’s Rye.  According to press materials, this one-time release starts as a four-year-old rye whiskey.  There’s no mention of mashbill, but I’d guess it’s the standard Beam rye mashbill.  This four-year-old rye is re-barreled into newly charred quarter casks and is further aged seven years.  A small amount of the rebarreled rye is blended with the traditional rye to make this release.

This is the first time I can remember quarter casks being used by one of the major American whiskey producers.  Some craft distilleries use them, and the results can be mixed.  At the same time I’m very familiar with Laphroaig Quarter Cask.  Using this type of casks usually results in a different kind of oak (and everything oak brings with it) flavor to whiskey.  Laphroaig is an example of a producer utilizing these casks for a positive influence.  What about Basil Hayden’s Rye?

The nose on the rye is both slightly youngish and oaky, but not offputting like some craft whiskies I’ve encountered.  There’s some rye spice right off the bat, along with hints of toffee, barrel char, and baking spices, with cardamon being most dominant.  The entry is a bit thin, due to the lower proof, but things pick up.  The rye spice on the nose isn’t as evident here, but it provides a touch of sharpness to the flavor, complimented by green tea.  Spiced caramel adds some sweetness, and vanilla pods add to its complexity.  Then oak tannins take over and begin drying things out for the finish, which is bittersweet and dry.

If you’ve had the Basil Hayden’s bourbon, the new rye whiskey will be familiar. Both are bottled at 80 proof, and both should be considered “mellow.”  Basil Hayden’s Rye is less sweet, spicier, oakier, and drier than its bourbon sibling.  The quarter cask maturation really magnifies the oak and astringency, as well as a more layered vanilla note.

I’d love to see this at a higher proof, but then it probably couldn’t be bottled under the Basil Hayden banner.  Maybe next year there’ll be a special Knob Creek Rye we can enjoy at 100 proof.  That’d be fantastic!  That said, there is absolutely nothing wrong with this whiskey as is.  Like Basil Hayden, it’s approachable and designed for someone new to whiskey or someone not looking for a BIG whiskey (read: cask strength) experience.  And nicely priced to boot!  Bottles are selling for around $45.  8.5/10

Thanks to Beam Suntory for the sample.  As always, all thoughts and opinions are my own.