This year mark’s Lagavulin’s 200th anniversary.  Recently at Tales of the Cocktail, I had a chance to chat with Dr. Nick Morgan, Diageo’s Head of Whisky Outreach, about the three special anniversary bottlings expected this year.

Ewan Morgan and Dr. Nick Morgan at Tales of the Cocktail

The first of the three bottlings is an 8-year-old whisky matured exclusively in ex-bourbon American hogsheads.  “When we started looking at it, the obvious way to go would be to do a non-age bottling because that gives you lots of flexibility to produce something affordable and really nice using young casks and old casks.  That’s what Diageo does.  We know how to blend stuff.  But then we felt that if did a non-age Lagavulin, we would upset the really vocal people in the internet whisky world.  That means instead of them saying ‘this is great,’ they would complain,” Morgan explained.

So they started looking at an age-stated whisky.  “One of our archivists said Alfred Barnard tasted an 8-year-old when he visited Lagavulin distillery.  I said ‘great thinking.  That’s the story.  That’s the liquid.”

Though famed whisky writer Alfred Barnard sampled an 8-year-old whisky when he visited the Lagavulin distillery in the late 1800s, don’t expect the anniversary bottling to be the same.  Morgan explained, “we are very clear this is not the whisky Sir Alfred Barnard would have tasted because he would have got it straight from the cask.  It would probably be far more phenolic, and so on.  So it’s not a recreation, but for the anniversary I suppose it’s an homage.” 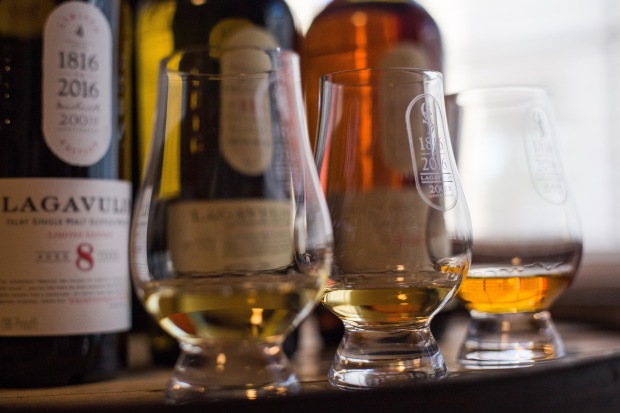 The nose comes across as bright, with sweet malt, peat and orange.  There is a light touch of salted caramel.  On entry, a blast of wood smoke hits the palate, followed by a pineapple, orange, tweeted malt and a tinge of vanilla.  The finish is long, sweet and smoky.  This whisky, though smokier than the 16-year, comes across as more vibrant, giving us more of the distillery character.  It is very well made, extremely tasty, and should appeal to fans of Lagavulin.  Pick up a bottle before it disappears from shelves for good.  Once it’s gone, it’s gone.  8.5/10

Also expected this year is an already announced 25-year-old bottling, and an even rarer single cask bottling.  Dr. Morgan said the latter release will most likely be sold by one retailer with “global reach.” The single cask is drawn from a sherry butt, and all proceeds will go to Islay-based charities.  “Hopefully it’ll make a difference and leave something behind from the anniversary,” said Morgan.  This bottling is expected to cost £1816.

Thanks to Dr. Morgan for sitting down to talk Lagavulin with me.  Also thanks to Diageo for the samples of the 8- and 16-year old Lagavulin.  As always, all thoughts and opinions are my own.