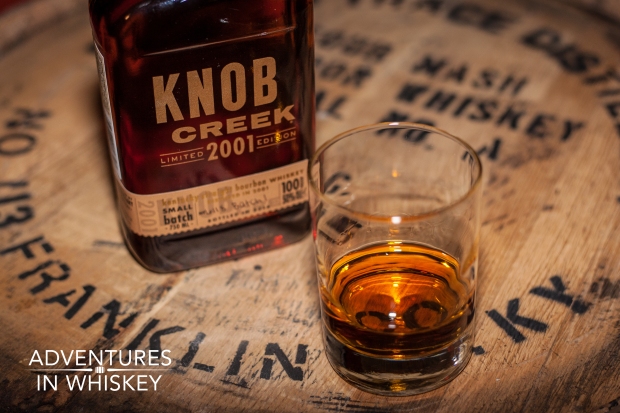 The standard 9-year-old, 100 proof Knob Creek is a solid pour.  Then came its higher proof, single barrel brother.  That expression came in at 120 proof and proved to be much more than just “a little stronger”.  It’s packed with so much flavor.

So, when Jim Beam announced a limited edition, 14-year-old version of Knob Creek I couldn’t contain my excitement.  About 36,000 bottles (roughly 12,000 bottles per batch) of Knob Creek 2001 are being released, which isn’t a lot by any stretch of the imagination.  You’ll find three batches of Knob Creek 2001, each with a slightly different flavor profile.  Batch 1 favors the sweeter caramel and vanilla notes, while Batch 2 leans towards the oakier side of things.  In the middle of the two batches lies Batch 3.

Knob Creek 2001 has no inherent age statement on the label, but it is a 14-year-old bourbon distilled in 2001, hence the name.  Jim Beam Master Distiller Fred Noe said this whiskey is just shy of being 15 years old.  This limited release carries an SRP of $130.

In an attempt to do something a little different, I’ve posted my first impressions of Knob Creek 2001 on Youtube.  You can watch that video below or jump past that for my full tasting notes.

For the most part, my first impressions were echoed in this separate tasting.  The nose has big notes of slightly burnt caramel, concentrated vanilla bean, honey roasted peanuts with hints of old leather jacket.  Old dusty oak is present the entire time but never overpowers.  The entry starts with an initial burst of sweetness provided by the caramel and vanilla combination.  A wave of spicy cinnamon sticks and cloves takes over the mid-palate alongside some Jim Beam nuttiness.  The smallest touch of burnt orange peel pops up afterwards.  That old, tannic oak found in the nose ramps up throughout the entire tasting experience, peaking at the dry finish.

Knob Creek 2001 feels richer and more refined than the standard offering, which seems a tad anemic next to this.  This is Batch 1, which is supposed to be the sweetest of the three batches.  As I said in the video, this batch is about as oak-heavy as I’d want Knob Creek to be.  Any more oak will throw the whiskey out of balance.  If I’m buying, I’d reach for Batch 1.  While not the best value for the price (Knob Creek Single Barrel carries that honor), Knob Creek 2001 is quite an enjoyable bourbon and comes with a recommendation.

8.5/10
knobcreek.com
(Note: A review sample was provided by the company behind this whisky free of charge.  The opinions written are my own.)