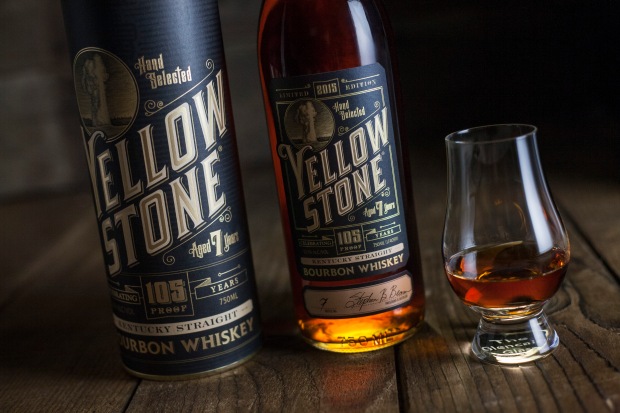 Yellowstone bourbon, in one form or another, has been around since the 1880s.  J.B. Dant, son of great distiller J.W. Dant, helped start the brand.  Over the years the brand has changed ownership several times, finally landing with the company that  would become Luxco in the early 1990s.

Steve and Paul Beam, whose family lineage runs deep in the bourbon industry, founded Limestone Branch Distillery in 2011.  Their great-great grandfather was J.W. Dant, whose son started the Yellowstone Brand.  Steve wanted to bring Yellowstone back to the family by distilling it again at his distillery.  Partnering with Luxco, they began distilling whiskey at Limestone Branch.  However, it’ll be a few years before we see anything from them.  Until then, they’ve kicked off the relaunch of Yellowstone bourbon with a one-time limited release.

The nose smells a bit young, with rye and corn upfront.  There’s some cinnamon here, along with touch of banana.  The entry starts with spicy cinnamon candy and mellows into stewed fruit, vanilla, caramel and some oak.  It’s got a medium, slightly oily body.  The high proof gives this whiskey some boldness, without being too harsh.  The long finish carries over a kettle corn note.

I know, I know.  On paper it looks like Blood Oath all over again.  That was an enjoyable whiskey, as is Yellowstone.  However, they are two completely different blends.  Bottom line, this is a nice bourbon blend put together by the folks at Limestone Branch distillery.

8/10
limestone branch.com
(Note: A review sample was provided by Luxco.)