Jameson Black Barrel is a step-up from the standard offering.  Like the standard expression, Jameson Black Barrel is a blend of grain whiskey and pot still whiskey.  What makes this one different is its age and maturation process.  This one is aged in a mix of sherry casks and bourbon casks.  The bourbon casks are re-charred before filling.  As far as age, this blend contains whiskies aged up to 12 years, but the majority is probably still 5-7 years old.  Yes, I know… that doesn’t mean much, as we don’t know percentages.

That different maturation is clearly evident on the nose.  Those Jameson aromas (honey, grain alcohol, floral) are still there, except now there are big sherried fruit and spice notes alongside them.  Flavor-wise, lovely honey and spiced fruit step up first.  Those charred ex-bourbon barrels add vanilla and cinnamon.  At 40%, this whiskey has an unexpected luscious and creamy mouthfeel.  The medium-length finish carries over some of that sweetness and spiciness.

Like I said in the first statement, Jameson Black Barrel is a step up from the standard offering.  It’s a more interesting whiskey, thanks in large part to the maturation process.  In my review of the standard Jameson, I mentioned the best way to enjoy it was over some ice.  With Black Barrel, go neat all the way.  I would love to see this released at a higher proof.  That would make it even more interesting.

7.5/10
jamesonwhiskey.com
(Note: A review sample was provided by Jameson.)

If you were to ask 100 people to name an Irish whiskey, the majority of them would say Jameson.  Everybody knows Jameson.  After all, it’s the biggest selling Irish whiskey in the world and available in most bars.

Funny thing about Jameson is it was started by a Scotsman.  Yes, John Jameson was born in Scotland.  He crossed the Irish Sea to manage his wife’s uncle’s distillery.  Jameson’s wife was Margaret Haig (same family who owned Haig Club Scotch whisky).  John Jameson’s son, John, eventually took over the distillery.  Fast forward a couple of company mergers, Jameson is now owned by Pernod Ricard. 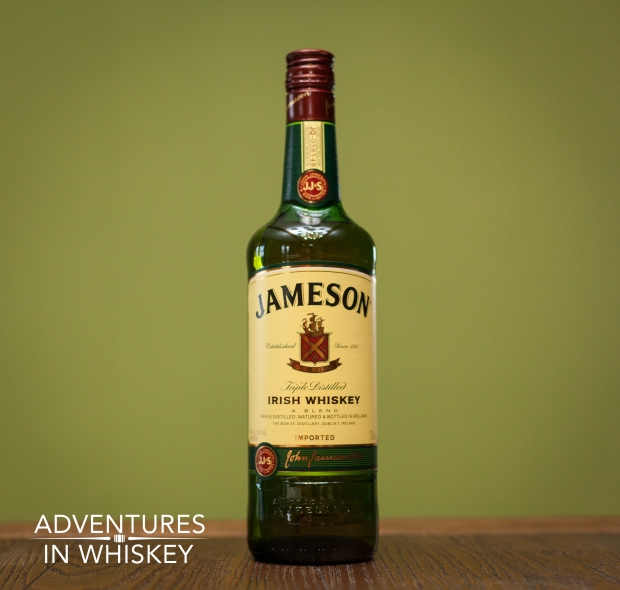 Jameson is distilled at the Midleton distillery in Dublin, which also produces Redbreast, Midleton, Powers and other Irish whiskies.  For a while in recent history, there were only three distilleries on Ireland producing all Irish whiskey – Midleton, Cooley and Bushmill’s.  New ones have cropped up in the last couple of years, ushering in a renaissance period in Irish whiskey.

The standard expression of Jameson is the one most folks are familiar with.  There’s no age statement on the label.  What we do know is it’s triple distilled, giving it a light body.  It’s also a blend of grain and potstill whiskies.  The final product is bottled at the minimum 40% abv.

On the nose is a bit of grain alcohol, along with a slight metallic/copper note.  A bit of light honey provides a sweet aroma, while a floral note keeps things a touch fragrant.  The entry is soft and surprisingly fruity.  I’m talking about slightly acidic berries.  Honey from the nose is also present, along with that odd grain alcohol note.  The finish is on the sweeter side, and doesn’t linger long.

This is a light bodied whiskey that seems to be made to sip with ice at a party, which is how I enjoy mine.  What’s in the bottle is just fine.  It’s not phenomenal or particularly memorable, but it serves its purpose.  Jameson does make for a great tasting Irish coffee, which is why I bought the bottle in the first place. That reminds me: Louisiana folks, pick up a free copy of the March/April 2016 My Rouses Everyday magazine at Rouses Supermarkets.  I have a piece on Irish Coffee in that issue.

Photo courtesy of The Glenlivet.

The latest entry to The Glenlivet’s Nadurra line is this Peated Whisky Cask Finish Single Malt.  If you’re unfamiliar with their Nadurra (Gaelic for “natural”) whiskies, let’s catch you up.  These are small batch, non-chill filtered, cask strength expressions from the distillery.  The current bunch have no age statement, but that doesn’t really matter so long as the whisky inside the bottle is good. Joining this Peated Cask Finish expression are an Oloroso-Cask matured whisky (I’ll review this one soon) and a First Fill Selection using first fill ex-bourbon casks for maturation.

Glenlivet’s Peated Whisky Cask Finish is exactly what it sounds like.  After maturation, the whisky was finished in casks that previously held peated whisky.  My sample bottle is from batch PW0715 and is bottled at 61.5% abv.  The suggested retail for a 750mL is $84.99.

The peated cask is evident from the start, but not overpowering.  I get an aromatic blend of fresh, ripe fruit (a Glenlivet signature), sweet toffee, vanilla extract and a dab of peat.  That dab of peat goes a long way.  It’s a balanced nose.  On entry, a welcoming sweet smoke coats the tongue.  Unusual for The Glenlivet, but a throwback to how whiskies were release many, many years ago, including whiskies from this distillery.  The high proof provides a surprisingly easy-drinking experience.  Candied fruit, creamy toffee, orange marmalade and a touch of spice lead to a long, sweet, and slightly smoky finish.  A little water tames the smoke and allows the sweeter notes to shine.

A peated Glenlivet expression?  It’s about what I thought it would be.  A tasty, interesting offering from the classic whisky distillery.  The added touch of peat smoke makes this whisky that much more complex.  Yet it still carries the Glenlivet DNA.  Very well done and highly recommended.

8/10
theglenlivetcask.com
(Note: A review sample was provided by The Glenlivet.)