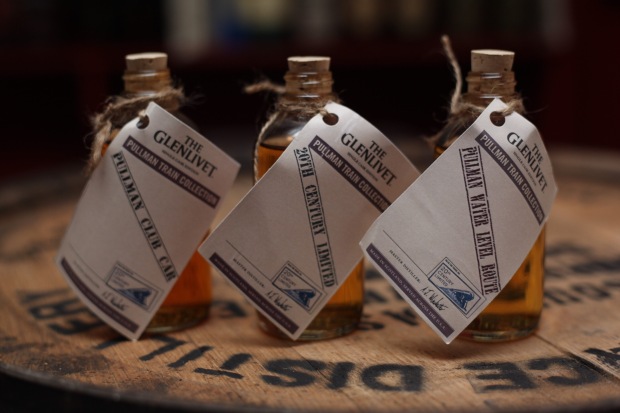 The Glenlivet is one of the biggest names when speaking of single malt Scotch whisky.  They’ve been (legally) distilling whisky since 1824.  Close to 200 years.  So it comes as quite a shock that they’ve never released a single cask single malt here in the good ole’ U.S. of A.  That’s being rectified, and in tribute to an important American company.

Started in the 1860s, the Pullman Company was the first railroad car maker to introduce sleeper cars.  Sadly, the company is no longer in existence, but it helped make travel by train a more pleasant experience.   Glenlivet was able to have its single malt sold onboard in little 2 oz miniature bottles. It helped spread the Glenlivet name amongst Pullman travelers.

In a pretty neat marketing move, the Glenlivet is releasing three casks of whisky, each named with a nod to the Pullman Company.  All three single casks are bottled at cask strength and are non-chill filtered.  The SRP is $349.99 for a 750ml.

Photo courtesy of the Glenlivet Distillery.

Named after Pullman’s Club Car, this release is 18-years-old and has matured in a sherry butt.  It has the largest bottling of the three casks with 618 bottles available nationwide.  I’m using the term largest in relation to three single cask bottlings, so there is a minuscule amount of this whisky available.  The nose is full of a variety of dried fruit and spiced apples in addition to hints of nutmeg and freshly roasted coffee beans.  There is an intitial syrupy sweetness on entry, which quickly develops big, dominant sweet orange and baking spice notes, followed by honey-roasted nuts.  The finish is long, and leaves behind candied fruits and roasted almonds.  An exquisite and rich expression of The Glenlivet that I hope to see as a more permanent addition to their lineup.  My favorite of the three!  9/10

This one’s aged in a Eurpean Oak Butt for 14 years, providing a mere 588 bottles for the public.  The nose on this bottling is rich with orange blossom honey, sweet roasted malt, vanilla ice cream with a sprinkling of a cinnamon syrup.  Compared to the sherry-cask matured “Pullman Club Car”, this expression comes across as lighter on the palate.  Lighter but spicier, Glenlivet “Twentieth Century Limited” maintains a sweet citrus note with hints of freshly grated ginger, shortbread cookies, and honeyed fruit.  The finish is a touch on the spicy side, leaving behind a sweet wasabi-like note.  A memorable expression from Glenlivet.  8.5/10

The smallest release of the three single barrel offerings, The Glenlivet Pullman Water Level Route offers only 321 bottles.  This particular bottling is named after the Pullman line that took passengers between New York City and Chicago via the Great Lakes.  It has aged in an American Oak Hogshead for 14 years.  This whisky comes closest to the Glenlivet style, full of fresh pear, honey, kola nut, and vanilla.  There are flavors of sweet malt, ripe pears and baking spices, with hints of cinnamon liqueur and toffee.  A bit of spice ramps up towards the medium finish.  While not a bad whisky, there isn’t much as much complexity of flavors to be found here compared to the other two expressions.  7.5/10

TheGlenlivet.com
Thanks to Glenlivet for the samples.  As always, my thoughts and opinions are my own.

Diddling around with an early bday gift from my wife. Now I don’t have to be plugged into an amp to annoy her. 😂😂😂
On New Year’s Eve, my wife and I lost one of our closest, most cherished friends. That night, a few of us gathered to commiserate, reflect, and remember. I opened and shared this bottle of Eagle Rare, which my friend gifted me on my wedding day years ago. 🥃 Life’s so fleeting. It’s important to spend time with those close to us.
Judging by this #2019bestnine collage, looks like you enjoyed my Scotland trip almost as much as I did.
Thanks @makersmark for this fantastic ornament. 🎄 It also serves as a coaster or hieroglyph key. 😉