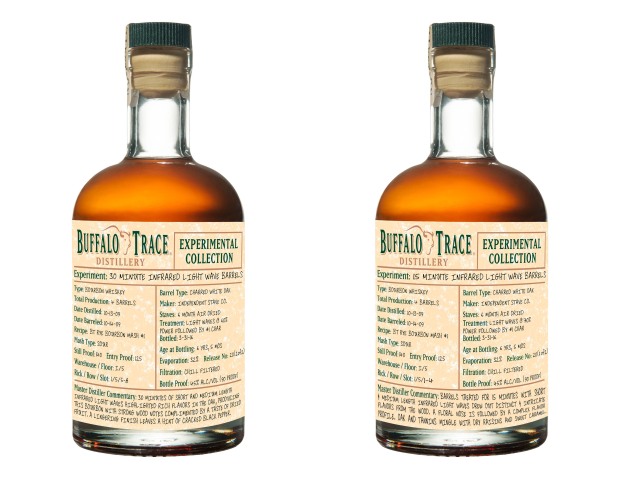 In what may be it’s most science fiction-like experiment yet, Buffalo Trace Distillery’s newest addition to their Experiment Collection sees the company using infrared light waves.  Just before the eight barrels used were charred, they were exposed to infrared light.  The press release explains the process:

Working with barrel cooper Independent Stave Company in 2009, eight special barrels were constructed. All eight first underwent the same process as standard Buffalo Trace barrels, staves were open air seasoned for six months before being made into barrels.

The whiskey matured for six and a half years in those barrels and then were bottled at 90 proof.  Keeping in line with the rest of the Experimental Collection, both the 15 minute and 30 minute are available separately in 375ml bottles for about $46.

The nose here carries lots of butterscotch, vanilla and sweet oak.  It’s one of the lighter noses I’ve encountered in a Buffalo Trace bourbon.  After a few moments in the glass, some red fruit aromas develop.  Taste-wise, oak is a tad more prevalent than the nose suggests.  The mouthfeel is on the thin side.  Lots of vanilla and oak spice prevail over the sweet traditional bourbon caramel.  The finish is full of vanilla ice cream and a touch of nutmeg.  Not bad.  Not bad at all.  It’s a young, solid bourbon that has some characteristics of older whiskey.  But, nothing special here.

There’s a lot more oak here compared to the 15 minute experiment.  This bed of toasted oak provides a foundation, followed by maraschino cherries, vanilla extract, dark caramel, and light floral notes.  The entry here is an initial hit of cinnamon spice, followed by tons of oak.  It’s mouth drying from the start.  Sweetness is provided by caramel candy and maple syrup.  With so much oak in the nose and palate, it comes as no surprise that the finish is short and dry.  Not a fan of this one.  Where things mostly came together for the 15 minute infrared experiment, this one is an oaky bust.

While I am always thoroughly curious with Buffalo Trace Distillery’s experiments, I don’t always love them.  This is one of those rare times.   These aren’t rot-gut bourbons by any means.  They are just okay, and that in itself is acceptable given the circumstances of experimentation.  Not all experimental whiskies are going to be phenomenal.  It’s just the nature of the game.

(Note:  A review sample was provided by the company behind these whiskies free of charge.  The opinions written are my own.)