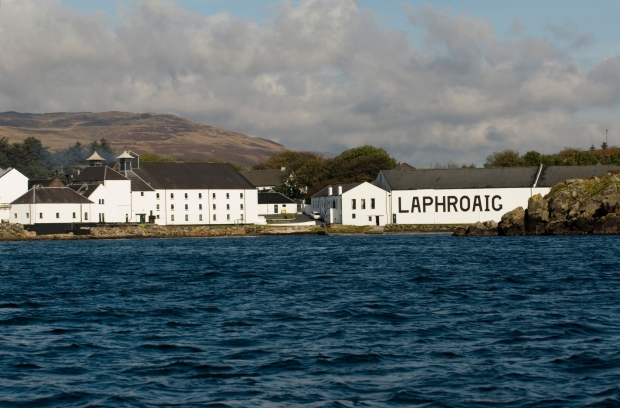 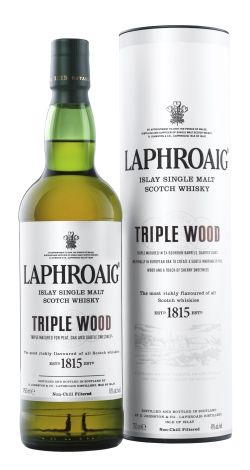 As the name suggests, this expression of Laphroaig is triple-matured.  The first maturation takes place in ex-bourbon barrels.  After an undisclosed amount of aging (after all, this IS a non-age stated whisky), the liquid is moved to smaller quarter casks for its second maturation.  After some time, the whisky is transferred again to European oak casks that previously held Oloroso sherry.  This release is non-chill filtered and bottled at a hearty 48% abv.

The nose is full of rich smoked fruit, caramel and peat, with some oak in the background.  The fruity aromas make sort of reminds me of a sweeter, younger sibling to Laphroaig 15 year old.  Taste-wise, oak is a major player – just as it is in Laphroaig Quarter Cask – and shows up immediately on the entry.  Sweet tropical fruit and toffee provide sweetness and richness to the whisky.  But, this is Laphroaig, so that signature ashy smoke and brine is here as well, though that salty note is a bit subdued.  Vanilla bean and a touch of wine pop up towards the end of the mid-palate.  The finish is a little hot at first, but fades over a long time and leaves behind smoked tropical fruit.

Laphroaig distillery manager John Campbell has concocted a rich, sweet and smoky whisky with Triple Wood.  There’s great precision in the use of ex-sherry casks for this release.  The sweetness the sherry cask-maturation provides gives this whisky extra layers of complexity and overall enjoyability.  Highly recommended.

The general rule of thumb is that peated whiskies lose their “peatiness” the longer they mature.  Laphroaig’s standard 10-year-old expression is a peaty slap in the face.  Let’s see what eight extra years of maturation does to the “smoky beast”.

On the nose is a bit of sweet, almost candy-like fresh fruit (honeydew melon and pineapple) and vanilla, alongside soft peat and honey.  Though it’s bottled at 48% abv, the entry is rather mellow.  Those saccharine fruit notes from the nose are also found on the palate.  Toffee lends a bit of richness (and sweetness) on top of smoky vanilla and just a touch of spiciness.  The peat comes across as a grassy note.  Some citrus (I’m torn between lemon peel and grapefruit) develops into the long, sweet and somewhat smoky finish.

Eighteen years in oak did mellow the peat Laphroaig is famous for.  Though this expression is still richly flavored, the peaty punch has changed from an knock-out uppercut to a strong right hook.  It still tastes like a Laphroaig whisky, just not as sweet or smoky.  Let’s call it refined.  I liked this whisky a lot the first time I tasted it.  I liked it even more upon further sampling.  Highly recommended, so long as you’re not expecting a giant peaty beast.