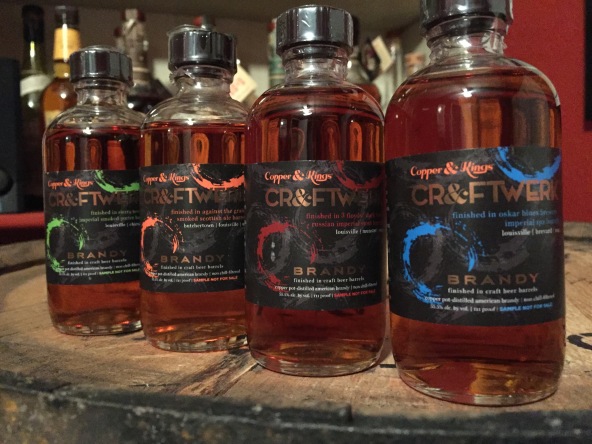 The secret about Copper & Kings is starting to leak:  Owner Joe Heron is putting out some delicious brandy.  However, Heron is not content just resting on his laurels.  He’s always looking to the future, and the next phase is what Copper & Kings is calling their CR&FTWERK series.

Heron is taking matured American brandy and aging it for an additional 12 months in American craft beer barrels.  To go a little deeper, brandy enters the finishing barrels at 130 proof.  After the finishing process is complete, the brandy is proofed down to 55.5% abv, or 111 proof, for bottling.  As always, Heron does not chill filter and his brandy contains no flavors or coloring.

Due out in March of 2016, the first four expressions use barrels from 3 Floyds Dark Lord, Sierra Nevada Smoked Imperial Porter, Oskar Blues G’Knight & Deviant Dale’s, and Against the Grain Mae Fanny Baw.  I’m told this is a continuing series, as Heron is already working with additional breweries.

I asked Joe about his process for choosing the finishing barrels.  He had the following to say:

They need to be fresh and “juicy”.  We want to work with the finest brewers, and represent them well.  We look at different beer styles.  Porters and stouts are obviously good for aging brandy, but we are excited by Scottish ales, IPA’s, and barley wine and lager wine barrels that we plan on using.  We want some diversity in beer styles.  It is a partnership so we want the beers aged in our barrels to be amazing.

Let’s get to the tasting.  It was suggested I try these neat, then again with ice or water.

Right off the bat, the beer barrel finishing is evident.  Those fruity and caramel brandy flavors are there, but are complimented by a malty note.  A small bitter herbal note is also present.  The high proof pack this brandy with a wallop of flavor, and give it a slightly chewy character.  I get a dark roast coffee and molasses, along with stewed fruit and spice.  That malty note from the nose is here as well.  The long finish is bittersweet  and is where the beer notes really shine.  A splash of water bring the beer character up front, while the brandy notes play second fiddle.

The nose for this expression is mainly brandy.  The beer barrel finish here is a tad more subdued, adding spice, herbs, and a touch of orange peel.  That’s where the subtlety ends.  The palate is hops & malt, caramel and fruit.  It’s not as malty as the 3 Floyds Dark Lord-finished expression.  A slightly burnt sugar note carries over to the crisp finish.  Some water brings out the hops on the nose, and bring forward the caramel and hops on the palate.  It also unveils a slight smokiness.

What’s nice about this specific expression is the fruity nature of the brandy is left largely intact.  The barrel finish kicks up a fresh, citrus note and some hoppy notes.  Copper & Kings’ official tasting notes are largely spot on:  “Clean, crisp, hints of black pepper.”  It almost comes across as a bit of citrus immediately followed by a slightly dry and spicy note.  Where sometimes brandy can be a bit “heavy,” it’s quite the opposite with this expression.  An ice cube brings about a slight caramel on the nose and palate, and up the hops.  Very fresh.  This would make a great summertime porch dram.

This expression smells like a rich whiskey – caramel, vanilla, fruit and a touch of oak char.  I even get some brininess.  If you gave this to me blind, I’d say this is a barrel-finished Island scotch whisky.  Taste-wise, there are no surprises on the palate – vanilla, toffee, brine, fruit and a faint touch of smoke.  Think Talisker with the smoke dialed way down and the fruit notes turned up.  The finish is spicy, long and sweet.  Add ice and the sweet notes become more prominent.

Joe Heron and his team at Copper & Kings have hit another home run with these upcoming releases.  Although the flavors presented here might not appeal to everyone, I think these brandies are interesting enough to create some new hardcore fans for the brand.  I applaud Heron’s decision to experiment with barrel-finishing his brandy, and can’t wait to taste what Copper & Kings releases next.