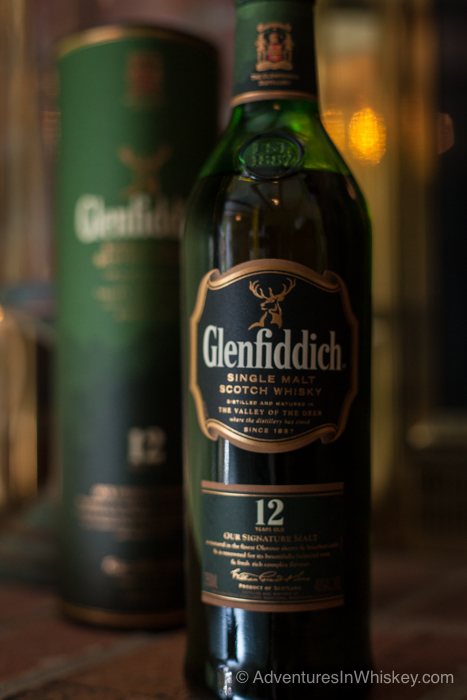 Glenfiddich is one of the best-selling single malt whiskies in the world.  It, along with rival Glenlivet, is available just about everywhere.  The distillery was officially founded in 1887, when William Grant first distilled whisky at the site.  William Grant & Sons was one of the first companies to market the single malt Scotch to the public in the 1960s.  Back then, single malt whiskies weren’t really on the market.  Blended whisky was king.  Apparently the robust and complex flavors of single malt Scotch was too much for people.  Aged in both ex-bourbon and ex-sherry casks, this 12-year-old whisky is the youngest in Glenfiddich’s core range.

This whisky has a light, fresh, and fruity nose.  Pear is prominent here, along with some green grass and vanilla.  Those aromas carry over onto the mellow palate.  I pick up some creamy vanilla custard, freshly sliced pear, and a hint of oak.  The finish is clean with slightly drying oak.

Glenfiddich 12-year-old is one of those whiskies that’s usually recommended for first time Scotch drinkers, and I can see why.  There’s nothing offensive here, and what is offered will probably appeal to bourbon drinkers looking to crossover to Scotch.  Nice crisp flavors at an affordable price (about $40) make this an easy recommendation.