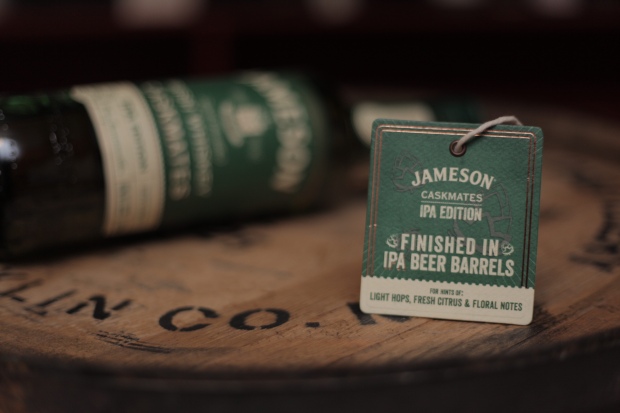 Experimentation in the whiskey world is not only a way to stand out, but it’s a chance to showcase the quality of the whiskey itself in a sometimes interesting way. Irish whiskey giant Jameson came out with the Caskmates series a while back. The first expression was Jameson finished in barrels that held stout. Quite delicious! Jameson’s latest offering is another entry in the Caskmates series. This time, they have aged their whiskey in barrels that held IPA beer.

For Jameson Caskmates IPA Edition ($29.99), they sent freshly dumped barrels to a local craft brewery who filled them with IPA. After an undisclosed amount of time, the barrels were emptied and sent back to Jameson to be filled with their triple distilled Jameson Original, their standard expression. The resultant whiskey is bottled at 40%.

I’m not a fan of IPA. Let me rephrase that: I haven’t found an IPA I’ve liked. I prefer beer with more malt than hops. So my approach to this IPA cask-finished whiskey is met with slight anxiousness. I say that, but I enjoyed Glenfiddich IPA Cask.

The nose is bright, with hints of grapefruit, candied rose petals, toffee and hops. It’s actually not as hoppy as I expected. The low proof gives the whiskey a slightly watery mouthfeel. Taste-wise, a wonderful mélange of flavors features candied almond, orange peel, toffee and hops. The medium finish leaves lingering sweet malt and hops, as well as light floral notes.

The whiskey and IPA combination mostly works. It’s good, but I don’t find myself reaching for another glass. I loved the Caskmates Stout Edition, so my lack of enthusiasm for this IPA Edition has to do more with my dislike of IPA rather than the quality of the whiskey. 7/10

Thanks to Jameson for the sample. As always, all thoughts and opinions are my own.