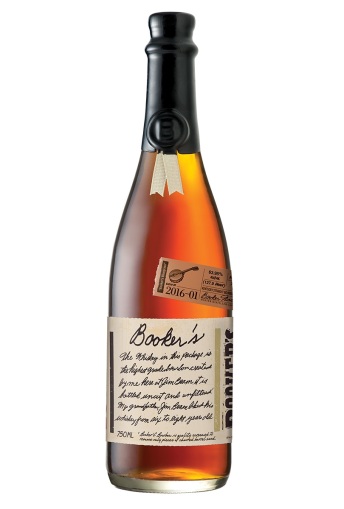 Since 2015, every batch of Booker’s bourbon from Jim Beam has been given a name in addition to a batch number.  From a marketing standpoint, it seems to be working.  The brand experienced double digit growth in 2015, according to Nielsen data.  This particular batch, the first of 2016, is named “Booker’s Bluegrass” after Booker Noe’s love of bluegrass music.

As stated right on the label, Booker’s is aged between six and eight years.  This one sits right in the middle at 6 years and 11 months old.  This batch comes to us at 127.9 proof, uncut and unfiltered.

The nose carries an overall profile that’s typical of Booker’s.  There’s robust caramel and vanilla, with a touch of oak and nuts.  I can pick out some sweet corn grain, but it’s not as prevalent as in past batches.  The high proof delivers big flavors.  On the entry is a little heat, followed by sweet corn grain, roasted nuts, and vanilla.  Caramel provides a bit of sweetness alongside the corn note, but it seems a bit thin.  Booker’s usually ends with a long finish.  This batch, however, features a shorter finish than expected.

This is a good, solid batch of Booker’s, but not a particularly memorable one.  As I wrote before, all batches of Booker’s carry an overall similar flavor profile.  Since they are all “small” batches, some variation will take place. Though a delicious and extremely sippable whiskey, this batch doesn’t quite stand up to last year’s excellent “Dot’s Batch”, but it’s close.  That said, if you’re a fan of the brand, you won’t be disappointed with “Booker’s Bluegrass.”

8/10
bookersbourbon.com
(Note: A review sample was provided by Booker’s.)

Can’t wait for tonight’s virtual blind whiskey tasting. 🥃🥃🥃 Great way to end this long week. Thanks for including me, @southerndrinkingclub
Tonight’s quarantine plan
I think there’s some rye whiskey in my immediate future. 🥃
I can’t believe it’s been a year since I visited @makersmark. What a beautiful distillery. I certainly need to make a return visit. 🥃 . . . #makersmark #kentuckystraightbourbonwhiskey #bourbon #whiskey #whisky