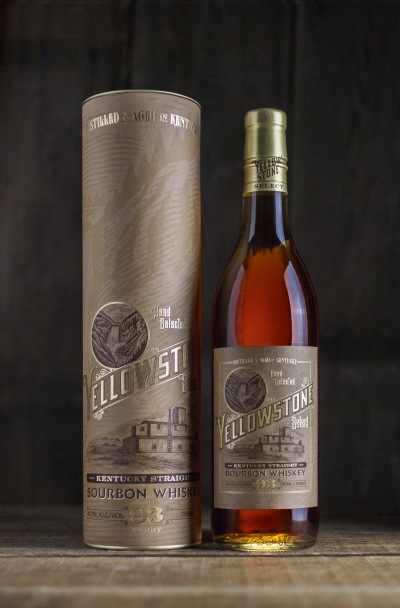 The autumn of 2015 saw the release of a limited one-off bourbon from Limestone Branch Distillery (LBD) and Luxco.  LBD’s Steve Beam took aged stock Luxco-owned (and sourced) and blended a great-tasting bourbon.  Fast forward a few months to 2016, and the first permanent expression to the Yellowstone line, Yellowstone Select, hit store shelves.

Coming in at 93 proof, Yellowstone Select is a blend of 4 and 7-year-old sourced bourbon.  This is much younger stock than the 7 and 12-year-old stocks that made up the Yellowstone 2015 Limited Edition release.  That’s understandable, as Luxco probably owns much more younger whiskey than they do older whiskey.

The nose here is youngish, with a sweet fresh corn note standing first in line.  Official tasting/nosing notes mention leather and citrus and oak.  I don’t get any leather, especially for a bourbon this young.  However, there’s a citrus note here.  It’s the smell of a freshly cut ripe orange.  Oak is present, but it stays in the background.  While it still tastes a little young, Yellowstone Select does feature sweet ripe fruit alongside buttered corn, rye spice and a touch of vanilla.  Nice. A general spiciness creeps up towards the end of the palate.  The finish is sweet grain, rye spice, and a slightly bitter note.

Where I really enjoyed the 2015 Limited Edition of Yellowstone, I feel slightly disappointed with this new release.  I don’t know the proportions of the 4-year-old and 7-year-old stocks that make up this blend, but it smells and tastes like there’s a lot more of the younger whiskey here.  For a bourbon priced at $49.99, I expect a bit more complexity.  What’s in the bottle isn’t bad by any stretch of the imagination.  It’s just a little overpriced.

7/10
limestonebranch.com
(Note: A review sample was provided by Luxco.)

It’s never too late for a cup of coffee and a good book. ☕️📖 . . . @foliosociety @criterioncollection #foliosociety #doctorzhivago #starbucks #coffee #book #pasternak
A couple of new samples to try this weekend. First is @glendronach 15 and the new @ardbeg Wee Beastie! 🥃🥃 . . . @ardbeg_usa #glendronach #ardbeg #singlemalt #scotch #whisky
A little World Whisky Day pour. Nice colorcast courtesy of tonight’s sunset. 🥃
Not sure about you, but I sure am glad the weekend’s here. It’s been a long week! 🥃