Last month Diageo, George Dickel’s parent company, invited me to the George Dickel distillery, covering my travel expenses in the process.  I was joined by four fellow whiskey bloggers for a private tour conducted by distiller Allisa Henley.  It seems Diageo really wanted us to come away with a better understanding of what goes into making George Dickel Tennessee Whisky.  I’m already a fan of their products, so this tour was highly anticipated.  Let the whiskey geek-out begin.

Old bottles and memorabilia at the Visitor’s Center.

The tour started in front of the visitor’s center/gift shop with a brief history of George Dickel, the man.  Allisa referred to him as an entrepreneur instead of a distiller, as he owned several businesses in addition to the distillery.   All that’s left of the original distillery that George Dickel owned is a few cornerstone bricks a couple of hundred yards away from the current distillery.  One anecdote she told involved George wanting to spell whisky without the “e” because his whisky is as smooth as any great Scotch whisky.

A bust of George Dickel in front of the Visitor’s Center.

Flowing nearby the original distillery, George Dickel’s water source is from Cascade Springs.  Limestone naturally filters out iron and other undesirable minerals from the water.  Since most of Tennessee and Kentucky sit on a limestone shelf, the quality of water there is conducive to making great whiskey.  On a quick side note, the scenery at the distillery and in surrounding Tulluhoma, TN is pastoral and relaxing.  If you come here, bring a camera.

Onto the actual distillery.  If you’ve been to any distillery tour, you get to see fermenters, beer wells, scales, and stills.  In that broad sense, Cascade Hollow is no different.  Except that it is.  Other distilleries I’ve been to are computerized or mechanized to varying degrees.  I did not see one computer at Cascade Hollow.  Everything here utilizes low technology.   Hell, even the scale used to measure the appropriate weight of grain is similar to that of the weight scale used by your doctor’s office.  It looks like it’s been in use for decades, and probably has.

George Dickel employs charcoal-filtering before the whisky goes into the barrel.  Charcoal-filtering, called the “Lincoln County Process,” is one of the steps required for the whisky to be called Tennessee Whisky.  Instead of dripping whisky through 10 feet of charcoal, like Jack Daniels, George Dickel goes a different route.  They chill their whisky to 40° and fill giant steel vats with it.  At the bottom of the vat is maple charcoal sandwiched between two perforated steel discs.  The whisky works its way through what essentially is a charcoal sandwich.  The reason they chill their whisky is because George Dickel, the man, thought he made better whisky during the cooler winter months.

Before it went for fermentation, we were able to sample some of their fresh mash.  As their mash bill contains 84% corn, this tasted like sweet buttery corn grits.  Some really good stuff.  My first huge whisky geek out was when Allisa let us sample some new make whiskey right off the still.  It came off the still somewhere north of 120 proof.  I expected something that would knock me on my ass.  Instead, while the alcohol vapor was pretty high, this stuff was easily drinkable.  I got a strong buttery popcorn flavor from this new make.  Outstanding. 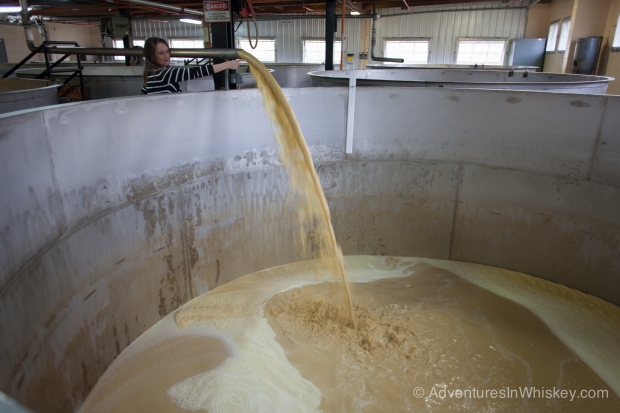 On the side of the barrel-filling room was a truck backed up to the door, full of new oak barrels waiting to be unloaded and filled with fresh whisky.  The operation here at Cascade Hollow is a small one.  Only two barrels can be filled at the same time and only by hand using fillers similar to gas pumps we all use on a regular basis.  Once filled, the bung is hammered on with a wooden mallet and the barrel is loaded for a long stay in a warehouse, which is where we were headed next. 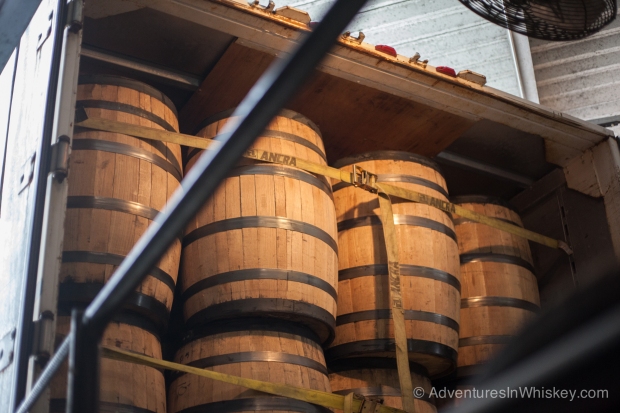 A hayride to the warehouses.

Getting to the warehouses was half the fun.  We took a hayride up the hill from the distillery.  Then came my surprise.  George Dickel ages their whisky in single story warehouses, just like Four Roses does.  You see, the majority of distilleries age their whisky in multi-story warehouses.  The higher the altitude, the larger the temperature variation between floors.  This temperature variation impacts how the whisky ages.  Buffalo Trace’s last Experimental Collection release shows how the same whiskey ages on different floors.

One of many single story warehouses at Cascade Hollow.

The inside of the warehouse smelled, for lack of a better word, incredible.  It’s a sweet oaky smell.  There were hints of whisky in the air due to the angel’s share (whisky evaporation).  Though the warehouse was one story, the barrels were stored 6 high and 27 deep.  Allisa schooled us on a little barrel warehouse knowledge, including how to tell what date the barrel was filled and what position the barrel bung needs to be in before being rolled onto the rack.  Interesting stuff.  If there’s one spot in the whole distillery I wanted to move into, this just might be it. 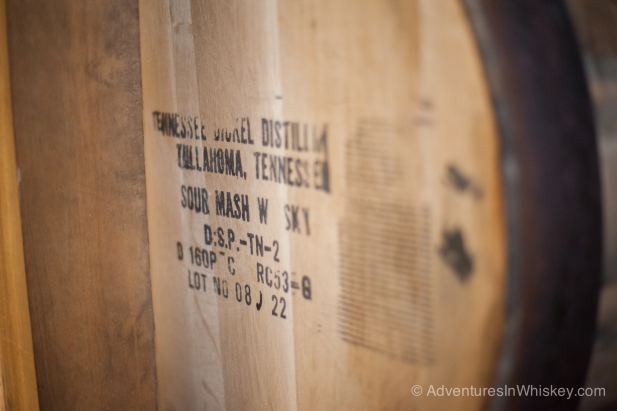 The bottom line “Lot No 08 J 22” indicates this barrel was filled on December 22, 2008.  The first number is the year.  The second letter is the month, counted by letters in the alphabet.  J is the tenth letter.  The third number is the day.

After a hayride back down the hill, we attended a catered lunch of delicious southern fare including fried chicken, pork, mac & cheese, potato salad and more.  There’s no better way to end a great meal than with a little whisky.  At the Tasting House, which many years ago used to be the office of the gentleman in charge of the warehouse keys, a flight of George Dickel whiskies awaited us.  This included Dickel No. 1 (a buttery unaged corn whiskey), Dickel No. 8, Dickel No. 12, Dickel Rye (a remarkably mellow charcoal-filtered 95% rye), Dickel Barrel Select, and a 9 year old Hand Selected Dickel.  Just like the “Old No. 7” on Jack Daniel’s bottles, nobody knows what the numbers on the bottles of George Dickel mean.  Allisa views them as the recipe numbers.  Not in a sense of different mash bills, but more like different flavor profiles.  Delicious stuff.

A flight of George Dickel.

All in all, the trip was fantastic.  I walked away with a greater appreciation of what goes on in Cascade Hollow.  Allisa and her crew are working hard distilling some great whisky.  George Dickel’s branding is “Handmade the Hard Way”.  That is spot on.  If you’ve only been to Jack Daniel’s Distillery, you’ve only seen one side of whiskey-making.  Next time you’re down in Tennessee, plan a trip to the little distillery in Tullahoma.  You won’t regret it.

Thanks to Diageo and Taylor Strategy for making this happen.